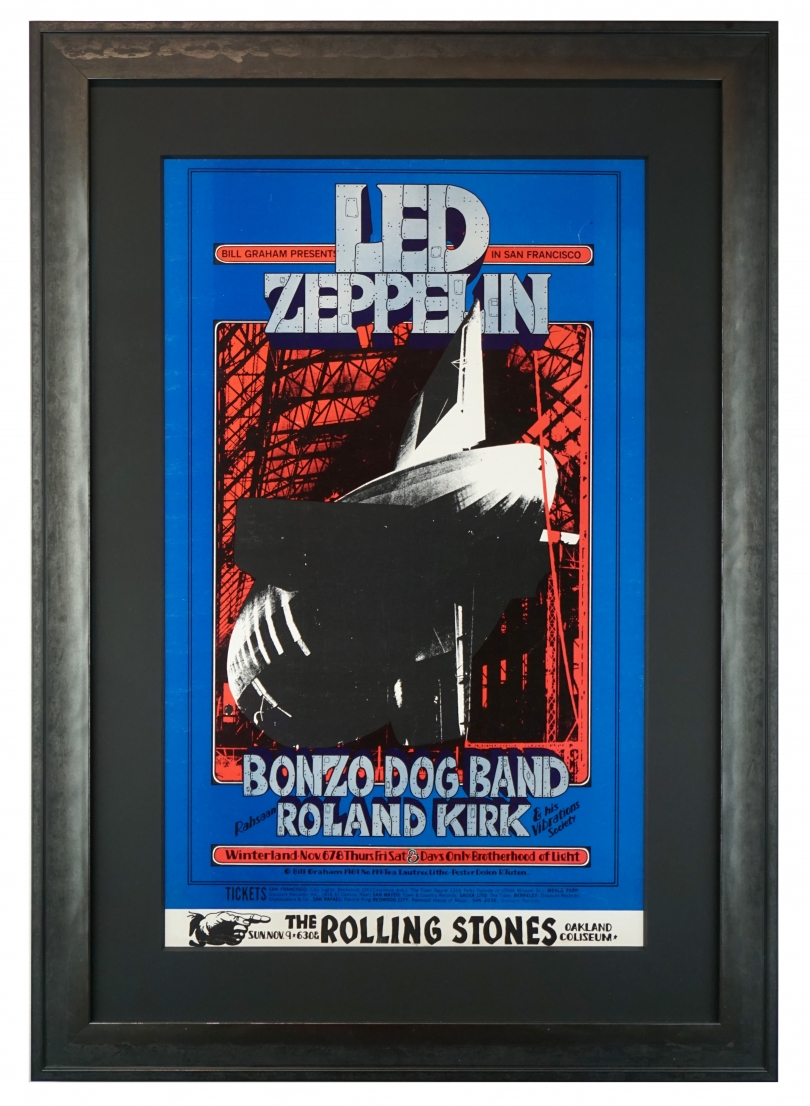 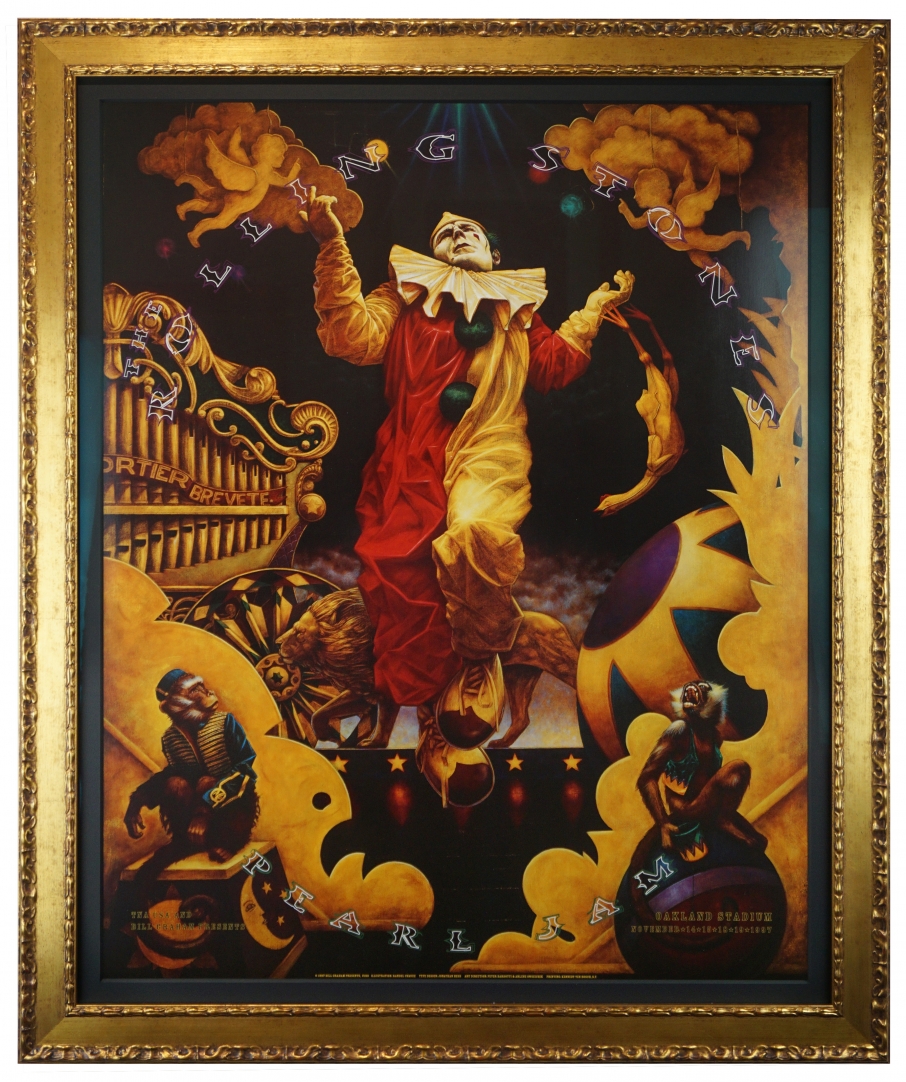 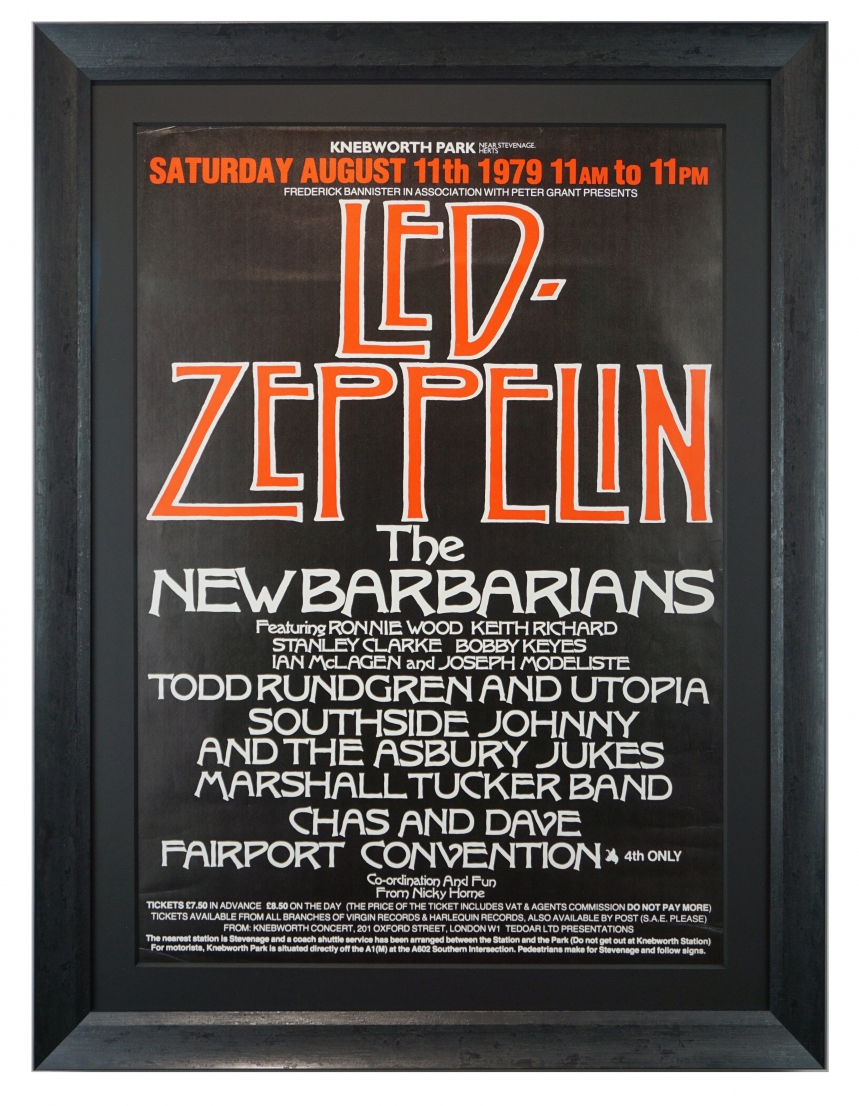 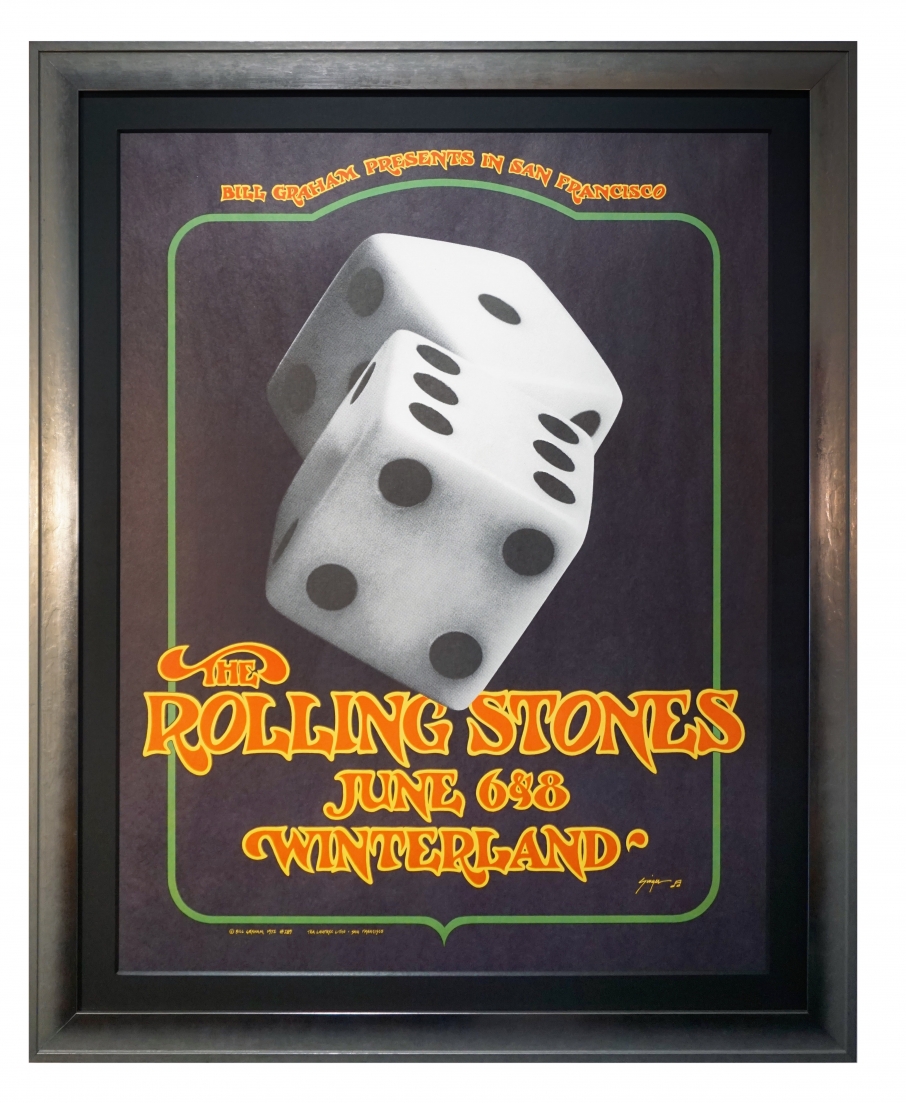 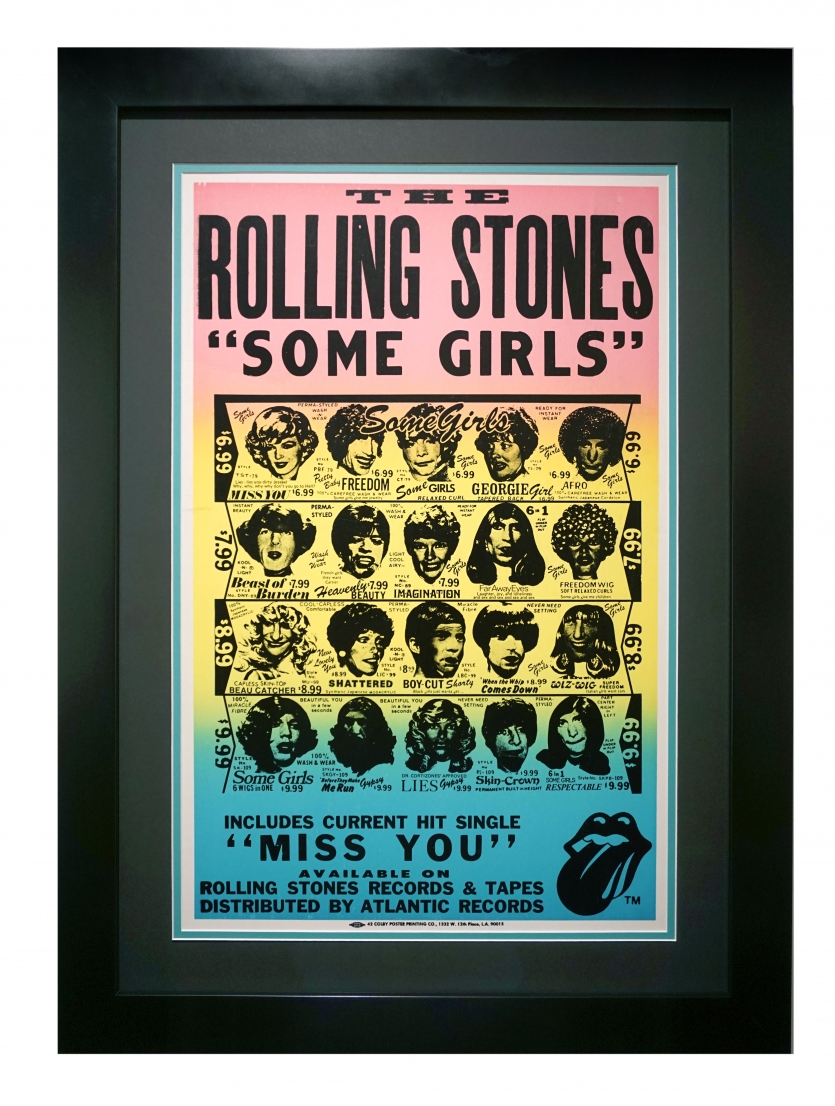 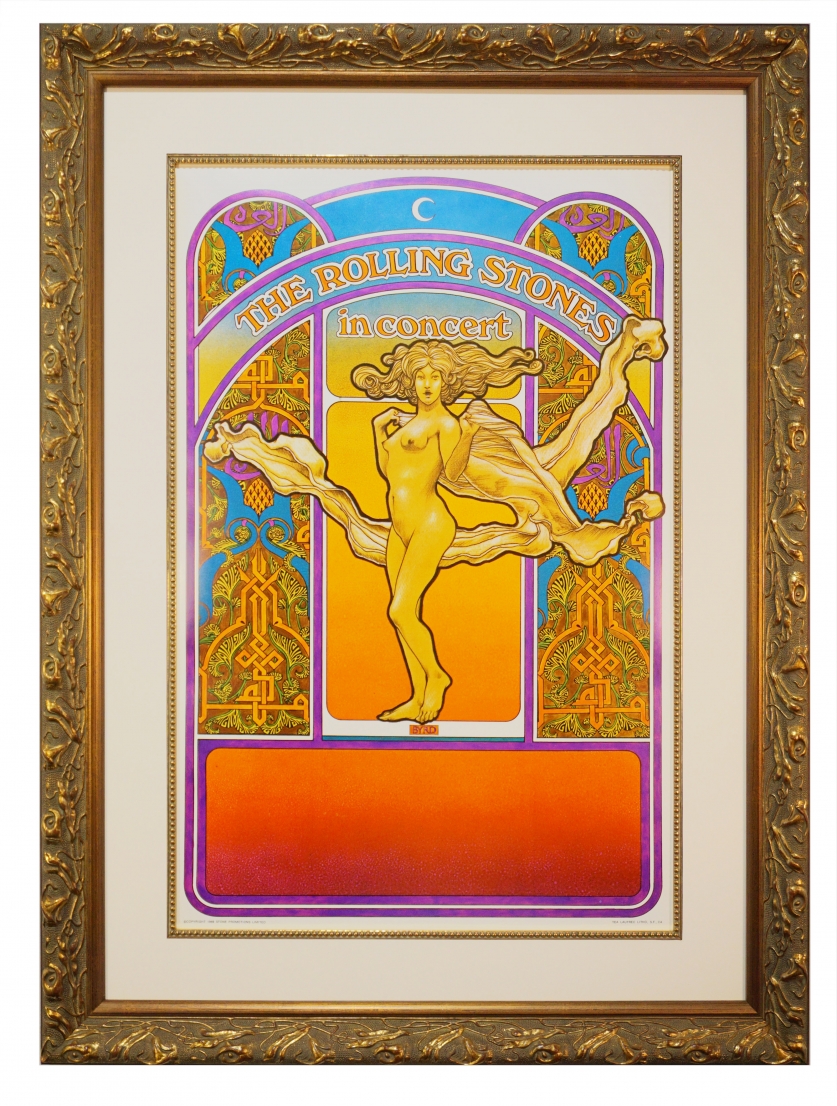 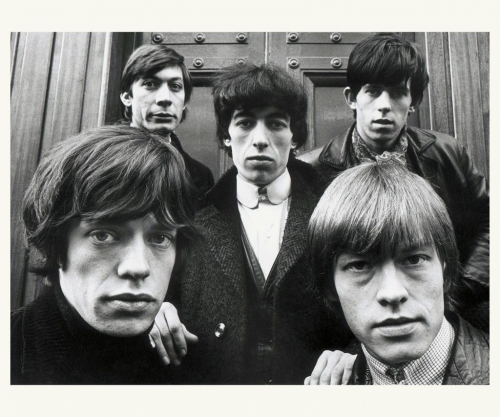 The Rolling Stones were at the forefront of the British Invasion of bands that became popular in the United States in 1964 and were identified with the youthful and rebellious counterculture of the 1960s. Rooted in blues and early rock and roll, the band started out playing covers but found more success with their own material; songs such as "(I Can't Get No) Satisfaction" and "Paint It Black" became international hits. After a short period of experimentation with psychedelic rock in the mid-1960s, the group returned to its "bluesy" roots with Beggars Banquet (1968), Let It Bleed (1969), Sticky Fingers (1971), and Exile on Main St. (1972). It was during this period they were first introduced on stage as "The Greatest Rock and Roll Band in the World".

What else needs to be said about the Rolling Stones?  From a psychedlic poster perspective, not a whole lot. The Stones did not play in the United States between the summer of 1966 and November 1969. Their final date was in Honolulu on July 24th 1966 and interestingly the last tour date the Beatles EVER played was just about a month later, August 29, 1966 at Candlestick Park in San Francisco. The Stones did come back to America in November 1969 - and began a series of once-every-three-year visits through 1981.

When the Stones returned for their Fall 1969 tour, the world had changed dramatically from the last time they had been on our side of the Pond. Instead of girls screaming there were audiences listening and consuming plenty of drugs. They had completely missed the psychedlic revoulution headquartered in San Francisco as they dodged constant harrassment back home over their own wild behavior and coming to grips (Brian Jones did not) with being huge stars while rock and roll was becoming a big business. There were just two posters (virtually identical) by Randy Tuten for the Stones' appearances in Oakland and San Diego in 1969, and a very beautiful Tour Blank designed by David Byrd. Then they disappeared again until 1972.

Because the Stones (and the Beatles) essentially missed the peak of the psychedlic poster era, we have to console ourselves with the few from 1969 and the subsequent years, some of which are still quite striking.