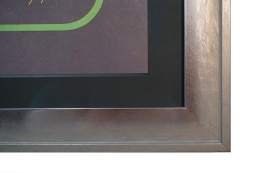 1972 saw the Rolling Stones returning to play the United States after their 1969 tour ended with the disaster at Altamont. This three-year gap between U.S. visits continued through 1981. The Stones played two shows at each of these dates at the rather intimate (5,000 people) Winterland Ballroom, with San Francisco being the third stop on their tour. This poster was designed by Randy Tuten, one of Bill Graham’s regular stable of artists.

The tour itself was marked by voracious partying and repeated clashes between police and concert-goers starting with the very first show in Vancouver when 31 policemen were injured as 2,000 people without tickets tried to crash the concert. There were also huge clashes between fans and police throughout the tour as the authorities tried to arrest people for using drugs. The last show was on July 26th, Jagger's birthday, featured balloons and confetti falling from Madison Square Garden's ceiling and Jagger blowing the candles off a huge cake. Pies were also wheeled in, leading to a pie fight between the Rolling Stones and the audience.

Meanwhile, opening for the Stones was 22-year old Stevie Wonder who was seen and heard by an estimated 500,000 fans on the tour. Stevie and Mick Jagger made music on the road, sharing the microphone for renditions of “Uptight” and “Satisfaction.” The New York Times, Don Heckman reported, “Spectacular as the Stones were…my most vivid memories are of the charged-up playing and singing of the blind soul singer/musician Stevie Wonder and his crisp little band, Wonderlove.” While most of Wonder’s set was made up of songs that were hits from 1960s, he ended the set with a show-stopping extended preview of “Superstition,” three months before the single was  released by Motown.