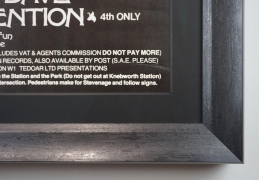 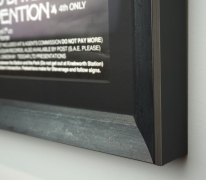 Featuring The New Barbarians with Keith Richards and Ronnie Wood.

The grounds of Knebworth House had been a major venue for open-air rock concerts since 1974. In 1979, veteran promoter Freddy Bannister booked Led Zeppelin to play that year's concerts, which took place on August 4th and 11th. This poster advertised the second show and it has been reprinted many times but this is the original first-printing. These would be the last shows Zeppelin played in the UK with drummer John Bonham, who died the next year.

Led Zeppelin had not performed live for two years, since the death of Robert Plant's son during the band's 1977 North American tour, and they had not performed in the UK for four years. Their manager Peter Grant decided that the band should perform at Knebworth instead of embarking on a lengthy tour, as explained by Dave Lewis:

“The whole [Led Zeppelin touring] operation had become too big.  They had played the biggest indoor arena in the UK (Earls Court) four years earlier. As Peter Grant saw it, they had to come back in the grandest style possible. Knebworth was the answer and after negotiations with promoter Freddie Bannister the August 4 date was scheduled with a second date on hold. The demand for tickets for the first date was enormous, leading to the second date being added.”

The band's fee for performing was reportedly the largest ever paid to one single act at that time, and attendance supposedly topped 210,00 on August 4th and 180,000 the week afterwards. These were amongst the largest crowds to which Led Zeppelin had ever performed. Lewis writes:

“For many in attendance it was their first ever concert experience. For many it would be the only time that they would get to see Zeppelin perform live. For that reason alone it holds a special affection in their live history. The first show in particular, with so much riding on it, was perhaps the most important shows they ever played.”

The New Barbarians were formed and led by Rolling Stones guitarist Ronnie Wood, and included Keith Richards, bassist Stanley Clarke, former Faces keyboardist Ian McLagan, and Rolling Stones confederate and saxophonist Bobby Keys.  The band played a mix of classic rock & roll, R&B, blues, and country music, along with Ron Wood solo material and Jagger/Richards songs. Wood sang lead on most numbers (with Richards, McLagan and Clarke providing back-up vocals), as well as playing guitar, pedal steel, harmonica and saxophone. They played two concerts in Canada and eighteen shows across the United States in April and May 1979, and then supported Led Zeppelin at Knebworth.