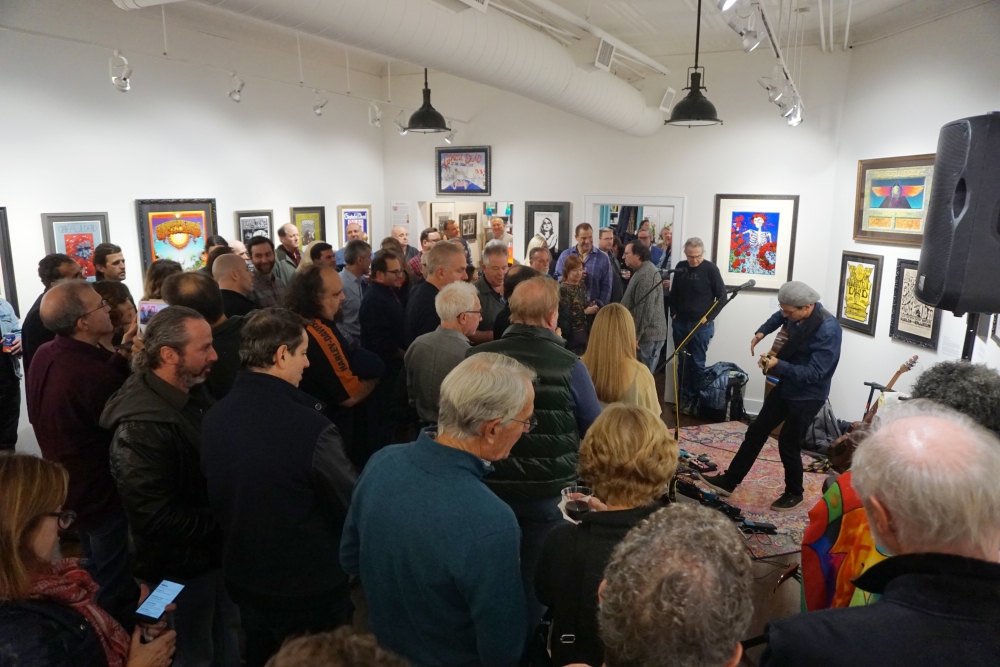 Doors opened at 7pm and at 7:30 we heard an opening set by our local slack key player, Ben Diamond and fiddler Blake Hanson. Stephen Inglis and Calvin Schaeffer took the stage at 8:00.

SCROLL DOWN TO SEE SOME PICTURES

Stephen (guitar) and Calvin (bass) played in a band called House of Spirits, with Bill Kreutzmann and played a number of shows on Kauai and around the Islands for a couple of years in the late 1990s. Stephen played a wide range of music including traditional Hawaiian, a good dose slack key Grateful Dead, some original tunes, Bob Dylan and more.

Barely out of his teens, Stephen formed a group with legendary Grateful Dead drummer, Bill Kreutzmann. No stranger to the music of the Grateful Dead. A life-long Deadhead through and through, Stephen took his native Hawaiian guitar playing roots and mingled it with the band that changed his life.

Along with his strong respect for tradition, Stephen is a creative innovator. His album “Slackin on Dylan” opened up new territory for slack key, winning him a Hawaii Music Award. He has made three albums of his own singer-songwriter originals, acoustic and electric. His latest album, “Cut The Dead Some Slack” Grateful Dead interpreted Slack Key style, has been garnering rave reviews worldwide.

Joining Stephen on guitar, Calvin Schaeffer has been a studio musician in San Francisco and Nashville and also owned and operated a successful commercial recording studio in the Bay Area. Amidst his varied musical background, he served as Bass Chair in a 22-piece Big Band jazz orchestra w/strings, and was a professional orchestral pit musician.

Ben Diamond opened the show with a generous set of original Hawaiian Slack Key-inspired guitar instrumentals.  Ben is a Long Island native and founding member of the Bahr Band.  He has been playing Slack Key and fingerstyle guitar for over 20 years and has studied with Keola Beamer and George Kahumoku Jr.  Ben first heard Stephen play at the Pakele Lounge (Waikiki, HI) in 2008 and was blown away.  He’s super-excited to open up for him on the 9th and welcome him to OUR island. Benwas joined on a tune joined by local fiddler extraordinaire, Blake Hanson.

Surprise cupckaes for The Bahr, just 61.