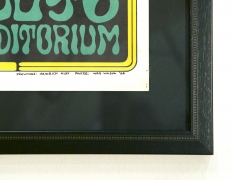 With their appearance here, the popular pop-rock Turtles, who had a string on Top-40 hits throughout the Sixties, became one of the few non-San Francisco bands (they hailed from L.A.), to appear at an early Bill Graham concert. Oxford Circle was a psychedelic garage-rock band that was unremarkable although several members wound up forming Blue Cheer, a somewhat better known and regarded psychedelic relic named after a particular “brand” of LSD made by the most famous underground chemist of the day, Augustus Owsley Stanley (“Owsley”).

The central image of jamming turtles was created by German illustrator and cartoonist Heinrich Kley and borrowed by Wes Wilson for this poster. This image was also the inspiration for the 1977 Grateful Dead album Terrapin Station. Several early Bill Graham posters carried a band’s hit song (in this case, “It ain’t me babe”) as a way to entice ticket sales.