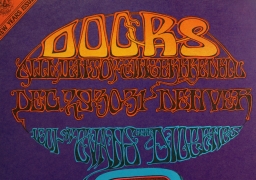 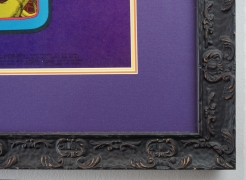 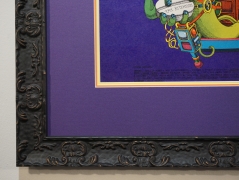 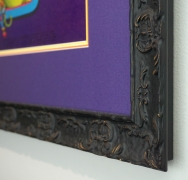 This cartoon alien image is amongst the most popular designs from the short-lived Denver Family Dog Series. The poster is one of the best Doors posters ever produced, and the only one done for the band by poster legend Rick Griffin. It includes his classic lettering style (which has led an official font in his name) and an offer from the alien to take a pill which may either cause one to “Pay Attention,” or maybe not.

The Doors had released their second album, Strange Days, in September and were ending the year after near constant touring. Less than three weeks before this show, singer Jim Morrison became the first rock performer arrested onstage during a concert that was being performed in New Haven. This poster advertised what was the only show the Doors ever played on New Year’s Eve. For the countdown to midnight, the light show projected a 'live' analog clock on the wall around 11:55pm while The Doors were playing 'When the Music's Over' - and the group managed to time it so that when the clock hit midnight – Morrison was at the climax of the song, screaming, "We want the world and we want it ... NOW!”