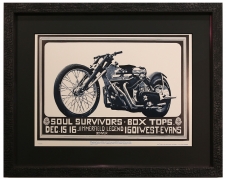 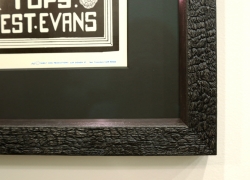 Is it any wonder that Stanley Mouse chose a silver motorcycle for a poster? In his senior year in high school, Mouse started painting t-shirts at car shows and at the fair, and became immediately, instantly famous. He would have ads in Rod & Custom Magazine, and would receive one hundred dollars every day in the mail. Then Mouse started pin-striping cars and when he got an airbrush, started spraying cars with flames. From 1957-1965, his parents went to work for him—his mother ran the mail order and his dad managed him on the road. They went to hot rod shows every weekend and during the week Mouse went to art school.

The Soul Survivors were a Philadelphia based soul music and R & B group known for their Top Ten 1967 hit, Expressway to your Heart. The Box Tops, had a smash hit, The Letter, which was #1 on the charts for four weeks in the Fall of 1967.