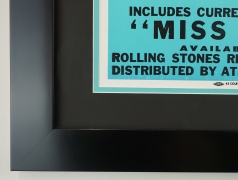 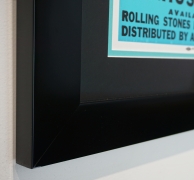 OUT OF STOCK, sorry.  Please us know if you would like us to contact when we find another. E-mail me HERE

This is an original in-store record promotion poster for the release of “Some Girls” in 1978, the 16th American studio album by the Rolling Stones. The album cover was designed by Peter Corriston, who would design the next three Rolling Stones album covers, with illustrations by Hubert Kretzschmar. An elaborate die-cut design, with the colors on the sleeves varying in different markets, it featured the Rolling Stones' faces alongside those of select female celebrities inserted into a copy of an old Valmor Products advertisement. The design was challenged legally when Lucille Ball, Farrah Fawcett, Raquel Welch, and others threatened to sue for the use of their likenesses without permission. Similarly, Valmor did take legal action and was given a monetary award for the use of their design.

By 1976, the Rolling Stones' popularity was in decline as the charts were dominated by disco music and newer bands such as Aerosmith and Kiss. In the UK, the punk rock movement was a rising force and made most artists connected with the 1960s era seem obsolete. The Stones had also failed to produce a critically acclaimed album since 1972's “Exile On Main St.”

Mick Jagger is generally regarded as the principal creative force behind “Some Girls.” In addition to punk, Jagger claims to have been influenced by dance music and disco during the recording of “Some Girls,” and cites New York City as a major inspiration for the album, an explanation for his lyrical preoccupation with the city throughout. Jagger explained:

“The inspiration for the record was really based in New York and the ways of the town. I think that gave it an extra spur and hardness. And then, of course, there was the punk thing that had started in 1976. Punk and disco were going on at the same time, so it was quite an interesting period. New York and London, too. Paris—there was punk there. Lots of dance music. Paris and New York had all this Latin dance music, which was really quite wonderful.”

In 2003 “Some Girls” was ranked number 269 on Rolling Stone magazine's list of The 500 Greatest Albums of All Time.