Close up of frame at angle 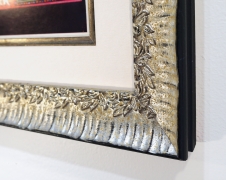 33 performing acts including Jimi Hendrix, Grateful Dead, The Who, CSNY, Joe Cocker, Janis Joplin, The Band and many others listed on the poster

We’ve all seen the dove on a guitar neck poster for Woodstock. This is a piece you may not have seen or heard of before. This was the original design, by David Byrd, for when the festival was to be held in Wallkill, New York. Byrd really captures the “Aquarian Exposition” aspect of the festival. Some consider it a far more beautiful design because of its simplicity and the absence of performers’ names. Because it was never used to promote the event, it is quite scarce today.

David Byrd designed posters for Bill Graham’s Fillmore East, and Graham recommended Byrd to the Woodstock producers. Byrd developed this poster, blending West Coast psychedelic aesthetics with a classic painting by Ingres entitled “The Source.” The nude Neoclassical woman was meant to reference the idea that the Age of Aquarius was upon us, a concept frequently used amongst hippies and the new age types who went to these concerts, purporting a novel type of consciousness with the universe.

David Byrd tells the story of how this poster came about:

“In the spring of 1969, Woodstock Ventures asked me to do a poster for the large outdoor concert they were planning for the village of Woodstock, NY. in August of that year. [NOTE: it was actually in Wallkill, NY] I based the poster on Ingre’s La Source and surrounded that image with cupids, flowers and hearts in jewel-tone colors. After I delivered the art to the printer in late June, I left for a month in the Caribbean to a town with 30 people and no telephone. During this time, the town of Wallkill forbade the show and it had to be moved to Max Yasgur's farm in White Lake, town of Bethel. As I was not available to do a new poster, it was done by another artist, and appropriately became very famous, while this version is mostly forgotten.”

There is a little more to the story than that, according to the Head Curator at the Museum of Bethel Woods, Wade Lawrence. The Byrd poster was likely to be redesigned anyway: there was nowhere on the poster to list the bands!