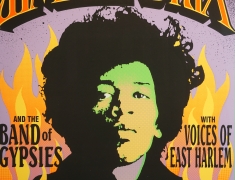 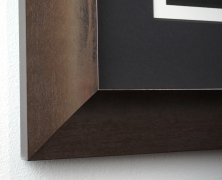 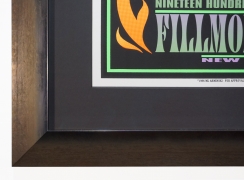 This is rare commemorative poster of Jimi Hendrix’s famed 1969 Fillmore East New Year’s Eve appearance which was designed by Mark Arminski in 1996. The design was apparently not approved by the Hendrix estate because this poster was never issued. Hence the designation at the bottom of the piece, “For Approval Only—Not to be Distributed or Sold.”

In high school, Detroit-based Arminski would create his own rock concert posters during class lectures - influenced by legendary local poster artists such as Gary Grimshaw and Carl Lundgren. "From the mid '70s to '80s, rock artists were doing black and white punk-style flyers and that's all they were doing. I thought, wouldn't it be cool to do nice color posters again?" states Arminski. His attempt to revive a generation and innovate has made him very popular with rock collectors and has given him an outlet to design for major acts such as Smashing Pumpkins, Stone Temple Pilot, Nine Inch Nails, Black Crows, Marilyn Manson, Los Lobos, Iggy Pop, Aerosmith and many others. Arminski's designs blend the psychedelic styling of the 60's with the clean graphics of the 90's with a unique retro style of using big bold and bright colors, and a superb lettering dominating the poster layout.