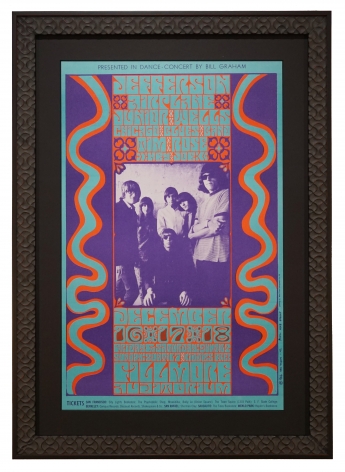 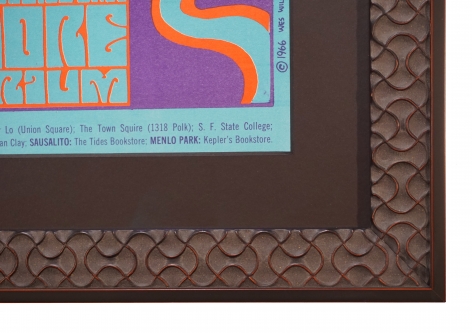 This classic Wes Wilson and photographer Herb Greene collaboration is the quintessential Jefferson Airplane & Fillmore poster with a terrific use of psychedelic coloring, a great photo of the band and classic Wes Wilson lettering, inspired by Vienna secessionist artist Alfred Roller. Jefferson Airplane had recently released their first album (“Takes Off”) and two months earlier had replaced retiring Signe Anderson with Grace Slick.

If you look closely at the background behind the Airplane, you will see some small wall etchings. This iconic wall of hieroglyphics was used as a background for the Surrealistic Pillow cover photography along with many other famous photos of San Francisco musicians in the late 1960s and it was located in Greene's dining room. One day Greene removed the wallpaper from the room to paint it, but before he had a chance to do that, his roommate drew a bunch of hieroglyphics which originally upset him but went on to be synonymous with the image of San Francisco psychedelic music.

Herb Greene was one of the most prolific photographer of the early Haight scene from 1965-1967. Most of his photos were portraits as opposed to live shots. Greene, a friend of many of San Francisco’s most influential musicians, worked as few photographers have, not as a documenter from the outside, but as a participant within the music scene he was photographing. Many of his pictures have become signature portraits of these musicians.