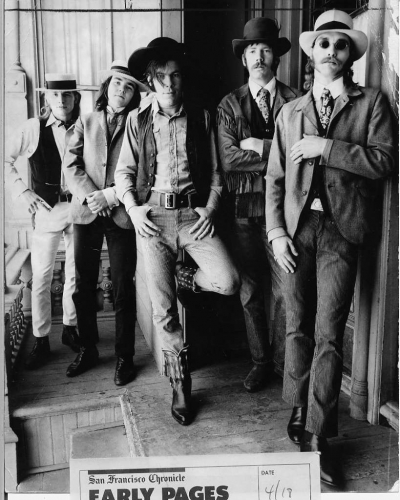 The Charlatans. A key band from the early days that never quite made it, the Charlatans had an outsized influence on hippie culture. Lured to Virginia City, Nevada for the summer of 1965 as a house band at the Red Dog Saloon, they and their posse soaked themsleves in LSD and came roaring back into San Francisco - members of their tribe included "Big Five" poster artists Alton Kelley, massivley influential concert promoter Chet Helms and psychedelic light show pioneer Bill Ham.

The Charlatans were known for clothing themselves in late 19th-century attire, as if they were Victorian dandies or Wild West gunslingers. This unconventional choice of clothing was influential on the emerging hippie counter-culture, with many young San Franciscans dressing in similarly late Victorian and early Edwardian era clothing.

Sadly, the band didn't get a record out until 1969, when the world had [assed them by. Of note, their drummer Dan Hicks went on to form Dan Hicks & his Hot Lick with considerably more success - but not more influence.