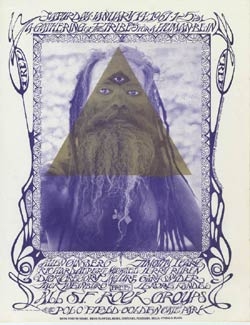 This happening in Golden Gate Park was a watershed in terms of bringing different groups together. It was a harbinger for the Summer of Love.The Human Be-In focused the key ideas of the 1960s counterculture: personal empowerment, cultural and political decentralization, communal living, ecological awareness, higher consciousness (with the aid of psychedelic drugs), acceptance of illicit psychedelics use, and radical liberal political consciousness. The hippie movement developed out of disaffected student communities around San Francisco State University, City College and Berkeley and in San Francisco's beat generation poets and jazz hipsters, who also combined a search for intuitive spontaneity with a rejection of "middle-class morality". Allen Ginsberg personified the transition between the beat and hippie generations.

Watch Video here.
Back To Top