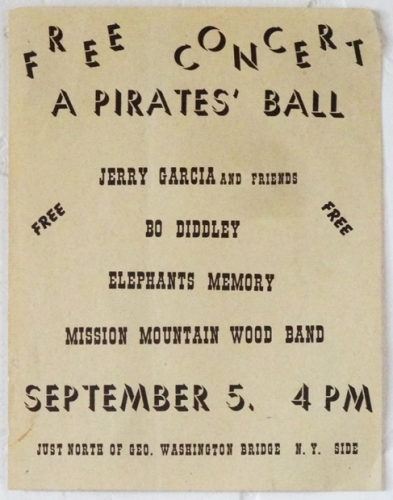 This 4:30 video has some amazing footage of the first legendary Pirate's Ball, September 5, 1973, held "just north of the George Washington Bridge, NY Side." This was a Hells Angles party aboard a boat named the SS Bay Belle that sailed around the NY Harbor. Footage includes a Hells Angels wedding, Angels flying the colors, women cavorting, and Jerry Garcia & Friends, including Merl Saunders, John Kahn and Bill Kreutzemann. They play "That's Alright Mama" and Jerry is playing his Doug Irwin-built Wolf guitar for the first time in public after it was delivered to Jerry the previous May.

Extremely cool interview with Jerry at the end, being asked about the Hells Angels.