Signed by Mouse and Kelley

Close-up of Mouse and Kelley signatures 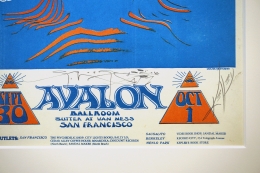 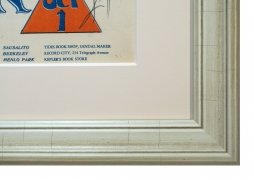 Known as the ZebraMan, this poster is one of the truly classic psychedelic images. It was produced by shining a light through a Venetian blind onto a man’s face. The photograph of this image first appeared on a Life Magazine cover dated December 6, 1954. Mouse and Kelley added the orange color to the original black-and-white image and placed it on the blue background with great effect.

The 13th Floor Elevators were one of the pioneering bands of psychedelic music but ended up as a one-hit wonder. They emerged on the local Austin music scene in December 1965. The band's name was coined because many tall buildings refused to name a floor the 13th and also because the letter M, for Marijuana, was the 13th letter of the alphabet. The Elevators were one of the bands first to refer to their own music as psychedelic, having that term printed on their business cards in January,1966.

The band released their debut album, The Psychedelic Sounds of the 13th Floor Elevators, in the fall of 1966, and while LSD was not yet illegal when the group began using it, marijuana certainly was, and 4 members of the group were busted for possession. While they attempted to keep up a busy schedule of performances, they did so knowing they could end up in jail at any time. Appearing on American Bandstand, when Dick Clark innocently asked who was the head of the group, they replied, "Well, we're all heads."

Riding on the back of their hit single, "You're Gonna Miss Me,” the band spent a few weeks in San Francisco in October 1966, where they made a strong impression on the budding scene. Back in Texas to record their second album in 1967 the band fell prey to their previous drug busts and overuse of LSD and broke apart. This poster was one of a handful of classics designed for the Austin visitors by the San Francisco Big Five artists.