Yardbirds at the Boston Tea Party 1968 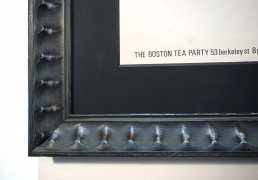 The Boston Tea Party was Boston’s Fillmore Auditorium and Avalon Ballroom rolled up into one. While enthusiastically supported, the east Coast intellectuals were a different brand of hippie than their free-flowing cousins out West. So it was with their poster designs. Manager Steve Nelson knew he couldn’t compete with the San Francisco School of artists and so he and designer Bob Driscoll went in the opposite direction with minimalist and usually black and white designs. The Boston Tea Party posters were printed in small quantities and this is a quite rare oversized piece from that era.

The Yardbirds spent much of 1967 and 1968 touring in the US with new manager Peter Grant, their live shows becoming heavier and more experimental. The band preferred to mix the Jeff Beck-era hits with blues standards and experimental psychedelia such as "Glimpses", a Page-written piece featuring bowed guitars, pre-recorded noise loops and a hypnotic wah-wah guitar groove. They also covered the Velvet Underground ("I'm Waiting for the Man") and Bob Dylan ("Most Likely You Go Your Way And I'll Go Mine") and American folk singer Jake Holmes, whose "Dazed and Confused", which became a live fixture of the final American tour in 1968. It was later selected it for the first Led Zeppelin record and featured frequently on tour.

The Steve Miller Band was on tour following the release of their first album, Children of The Future, in February, 1968.

Earth Opera was a Boston-based psychedelic folk band featuring Peter Rowan and David Grisman, both well-known local bluegrass virtuosos. Grisman went NYU and played in the the Even Dozen Jug Band with Maria Muldaur and John Sebastian. He played in the bluegrass band the Kentuckians led by Red Allen, then in Earth Opera. In 1969 he moved to San Francisco, met Jerry Garcia, and appeared on the Grateful Dead album American Beauty and later played in Garcia's bluegrass band Old & In the Way with John Kahn, Peter Rowan and Vassar Clements. Rowan wrote the song “Panama Red.”