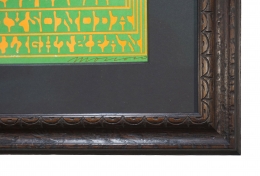 A truly inspired surrealist collage by Victor Moscoso featuring a man surfing on a few hands while a sun is donated to the scene by another hand. Moscoso’s lettering was in fine style for this piece which is very similar in composition to the next poster he did for the Avalon. Likely completed at the same time, that poster featured a hand coming out of the sky and giving some bikini-clad ladies wings.

Canned Heat was an American rock band formed in Los Angeles in 1965 by two blues enthusiasts, Alan Wilson and Bob Hite, who took the name from Tommy Johnson's 1928 "Canned Heat Blues", a song about an alcoholic who had desperately turned to drinking Sterno, which was originally marketed as "canned heat." The band appeared at most major musical events at the end of the 1960s, performing blues standards along with their own material and occasionally indulging in lengthy psychedelic solos. Two of their songs – "Going Up the Country" and "On the Road Again" – became international hits.

Country Joe and the Fish was formed in Berkeley, California, in 1965. The band was among the influential groups centered in the San Francisco music scene during the late-1960s. Much of the band's music consisted of issues of importance to the counterculture such as anti-war protests, free love, and recreational drug use, with lyrical content daringly to the point. Through a combination of psychedelic and electronic music, Country Joe and the Fish's sound was marked by innovative guitar melodies, use of Eastern motifs and distorted organ-driven instrumentals which were significant contributors to acid rock.

The title song for their second album called, “I Feel Like I’m Fixing to Die,” became their signature tune, featuring dark humor and satire around happy yet sarcastic lyrics and is among the era's most recognizable Vietnam protest songs.