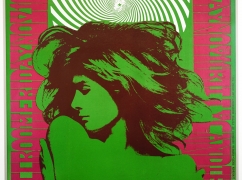 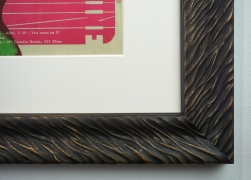 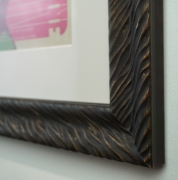 This poster was designed by Carl Lundgren, for a pair of November 1967 concerts featuring blues harp legend James Cotton and Detroit icons, the MC-5. Sometimes known as the “other poster artist” for the Grande Ballroom, Carl was hired in 1967 by Gary Grimshaw, who designed the bulk of the highly-regarded Grande Ballroom posters in Detroit. The Grande, which was, “the Fillmore of Detroit,” attracted Hendrix, Cream, The Who, Jefferson Airplane and many other top acts during the late 1960s.

Vanessa was easily the greatest work of Carl Lundgren’s career (it graced the cover of his autobiography) and represents a high-water mark for psychedelic poster design combining imagery, fantastic lettering and the central image of a day-glo green, naked, hair-swinging Vanessa Redgrave. Lundgren’s use of the opposing colors create a vibrant, mesmerizing effect similar to the best work by Victor Moscoso.

The original black and white photo was taken by Victor Skrebneski in 1967 to promote the film, Isadora, about the life of free-spirited interpretive dancer Isadora Duncan which starred Redgrave. The film was released in 1968 and Redgrave was nominated for the Oscar for Best Actress. Chicago-based photographer Skrebneski, is known for his high-styled and glamorous fashion and advertising photography and this photograph of Redgrave is typical of the dynamic style Skrebneski used for his black-and-white portraits.

This poster is exceptionally rare and is on the top ten list of most collectors. These were printed on fairly thin stock that damaged easily. Most pieces either have some damage or they have been lightly restored, which is the case with this piece - there was a tear in the bottom left hand corner that has been restored. Grande posters were produced in very small runs of 500-1000 and their survival rates are much lower than the posters from San Francisco. In addition to the small press runs,, there were far fewer collectors of this material in the Midwest at this time compared with out West.