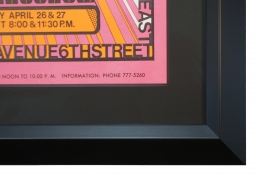 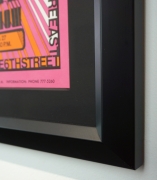 This was David Byrd's first concert poster for Bill Graham. The 28 year-old artist admitted he was "flying blind," and the design was his interpretation of "... what they were doing in San Francisco."

At a time when electric guitars ruled rock, Traffic emphasized Winwood's organ and the reed instruments played by Chris Wood, especially flute. After Dave Mason, who had provided the band with an alternate folk-pop sound, departed for good, Traffic leaned toward extended songs that gave its players room to improvise in a jazz-like manner, even as the rhythms maintained a rock structure.

In the summer of 1967 Traffic’s first single, “Paper Sun,” was a Top 5 UK hit. Their second single, “Hole in my Shoe,” which reached #2, irked the 19-year old Winwood as he felt the Dave Mason composition was not reflective of the musical direction he wanted the band to go. While the “Dear Mr. Fantasy” album was released in December 1967, Mason left the band, only to return for Traffic’s second album later in 1968.

This U.S. tour ran from March 14 through May 2nd and they played the classic psychedelic rock concerts showplaces in the most happening areas of the country including Bill Graham’s Fillmore, Winterland and Fillmore East, the Shrine and Whiskey A Go Go in L.A., the Grande Ballroom in Detroit, the Cheetah in Chicago, and the Boston Tea Party.

San Diego-based Iron Butterfly formed in 1966 and in December 1967 they released their first album, “Heavy”. Despite not having a hit single to provide an entry point for the casual listener, “Heavy” was a commercial success, reaching number 78 on the Billboard charts and eventually going Gold in the US. The psychedelic classic "In-A-Gadda-Da-Vida" was not released until their second album, but Iron Butterfly was already playing it in concert at these shows.