This poster hanging as part of the Bill Graham and the Rock & Roll Revolution Exhibition at the NY Historical Society Museum in NYC, Feb 2020-Jan 2021. 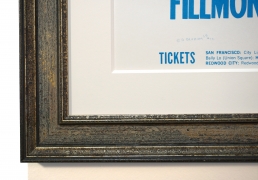 NOTE: This piece hung in the "Bill Graham and the Rock & Roll Revolution" Exhibition at the New York Historical Society Museum in Manhattan from Fubruary 2020 to January 2021.

This rather odd poster stands in stark contrast to the psychedelic masterworks of the late 1960s. The story is that Bill Graham was constantly badgering the poster artists about legibility – as the promoter he naturally wanted to the viewer to know what band was playing. The psychedelic artists’ position was that it was better to engage the viewer for a long period of time with something interesting and challenging to the eye.

So it was in March 1968 when Bill Graham came up to Stanley Mouse, saw this poster and asked “what’s THAT?!”  Mouse said, “it’s just what you wanted, Bill.” Not surprisingly this was the last time Graham brought this subject up although in the long term he managed to find a different stable of artist like Randy Tuten and David Singer who were a little more straightforward.

The image is quite a surreal photo collage that was taken at San Francisco’s Playland amusement park by Bob Seidemann, who would later supply the now-considered-porn photo on the cover of Blind Faith’s 1969 album featuring, like the headliners here, Steve Winwood. [Seidemann was also a personal friend and flatmate with Eric Clapton]. Artist Stanley Mouse is actually in the photo, with his head down holding a doll.

H. P. Lovecraft was an American psychedelic rock band from Chicago named after the horror writer of that name. Much of the band's music was of a haunting, eerie ambience, consisting of material that was inspired by the macabre writings of the author. H. P. Lovecraft embarked on their first tour of the West Coast in late 1967, establishing themselves as a live favorite with the hippies of San Francisco and Los Angeles. In November 1967, Billboard magazine reported that their first album had become something of an underground hit in San Francisco and had already sold 1,100 copies there. There, the band was championed by concert promoter Bill Graham and this led to appearances at such high-profile venues as The Fillmore and Winterland.