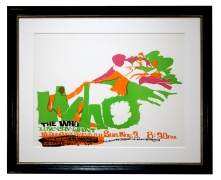 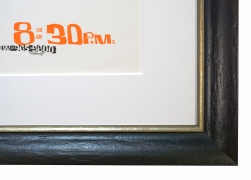 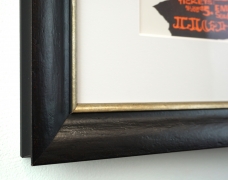 Dating from November 2, 1969, this poster promotes the appearance of The Who in McDonough Arena at Georgetown University, Washington D.C. The artist was Lou Stovall who produced this poster for free. This poster is very scarce and seldom offered for sale.

The image is a stylized, abstract interpretation of Michelangelo’s “Creation of Adam,” which was painted on the ceiling of the Sistine Chapel. It illustrates the Biblical creation narrative from Genesis in which God gives life to Adam. The image of the near-touching hands of God and Adam has become an iconic symbol of humanity. The artist considered both Georgetown’s Catholic and Jesuit heritage and the spirituality of Tommy, the main character in the Who’s rock opera.

The event was booked in the Spring when Tommy had just been released and by the time the warm Sunday night in November rolled around the Who’s opus was dominating campus turntables everywhere. Their performance at Woodstock that summer helped cement The Who as one of the hottest acts on the planet. 4,200 tickets sold out at $5 each almost immediately and later it was determined that another 1,000 people could fit on the second level.

Waiting for The Who to take the stage that night was excruciating for the crowd packed into McDonough. The unfortunate opening act was Love, Cry, Want—a jazz trio that drew lusty boos. Hoyas and townies alike were pounding their hands and feet, pleading for the headliners. Things only got worse when the opening act departed; house lights glared for what seemed an eternity as roadies lugged out The Who’s equipment. They finally came on around 10pm playing to an estimated 6,000 people who rushed the stage.

The Who blew McDonough wide open. Washington Post critic William C. Woods called it “the most electrifying rock performance I have ever seen.” The band’s first set included a wild rendition of “I Can See for Miles” with Daltry egging the crowd to belt out the chorus, plus a profane screed from Townshend, who urged everyone “to end the f***ing war by taking to the streets”—at which point the band ripped into their defiant anthem, “My Generation.”  The second set consisted of Tommy, performed virtually in its entirety—and playfully dedicated by Townshend to the concert’s gatecrashers.

Born in 1937, artist Lou Stovall moved to Washington, D.C. and earned a B.F.A. from Howard University in 1965. While there, Stovall was influenced by his teachers to give back to his community and to share his wisdom with young artists. In 1968, Stovall started Workshop, Inc. as a small studio concerned mainly with community posters. Under Stovall's leadership, Workshop evolved into a professional and highly respected printmaking facility. The rules were that Stovall would teach anyone who wanted to learn, as long as they agreed to stay around to teach someone else.