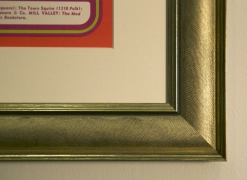 This poster is arguably the most iconic of the psychedelic poster movement. Perhaps because the job called for advertising so many shows, Wes Wilson was able to submerge the headliners behind the simple, mind-blowing summary of the whole trip, calling it, “The Sound.” Wilson, more than the other artists of the time, used the nude feminine form as part of his Art Nouveau-influenced flowing representations of the psychedelic experience – not to mention evoking the sexual revolution that was unfolding at the same time.

The woman is joyous, free, and in a state of dancing bliss with her arms and hair framing the headline. She is voluptuous and sensual and calls out to invite the viewer to join in the experience.

In order to save money on printing what were considered throwaway advertisements at first, printers and the poster artists would use whatever stock and sometimes even colors they had lying around. Therefore, with the 1966 posters, some of them have multiple printings that make up the original pre-show run. Such is the case here. There are three types:  OP-1 is actually black and white, OP-2 where the woman's outline is more of a magenta color, and OP-3, this one, where her outline is darker, described as purple. I have owned both and maintain they are equally beautiful!