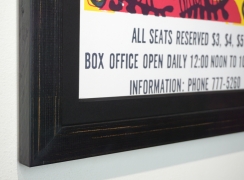 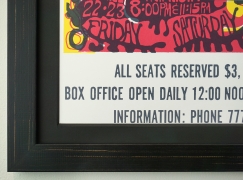 The Fillmore East opened March 8, 1968 and was a near-instant success. Offering two shows at 8pm and 11pm on Friday and Saturday nights, this was just the venue’s third weekend but the Doors were big enough to sell out all four shows, selling more than 10,000 tickets which in early 1968 was a big number. Reserved seats were $3, $4, and $5 for the Doors, on the cusp of releasing their third album, were at the height of their powers.

In the early show on Friday, Morrison introduced a new 5-minute art film, The Unknown Soldier by pretending to be a college professor and asking the "class" to pay close attention to the movie because afterward there would be an exam. That was followed by playing, "The Unknown Soldier,” and then the first full length rendition of "The Celebration of The Lizard". In the late show on Friday, The Doors opened with "When The Music's Over" in which Morrison, seemingly absent, came flying over the drum kit and leapt down in front of the microphone just in time for the opening scream.

On Saturday at the opening show, Morrison held onto the rising curtain taking him high into the air before letting go at the very last second soaring down right in front of the microphone in perfect timing to open the show with his introductory scream.  After Saturday's late show The Doors were in such a good mood they asked Bill Graham if they could do another encore.  Graham came out on stage as the audience was filing out and asked them if they want some more, and the band ended up playing another entire set lasting over an hour.

Bill Graham only did a handful of posters to promote shows at the Fillmore East, preferring to use smaller, more economical postcards in all but a few cases. As such, the original “poster” for this show was a postcard. In 2006 two printings of this art in traditional poster size were authorized and produced and this was the first printing of the poster with a press run of 1,000 copies.