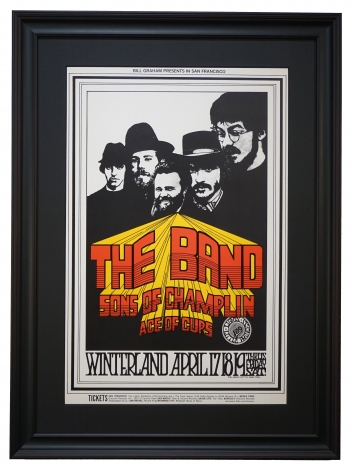 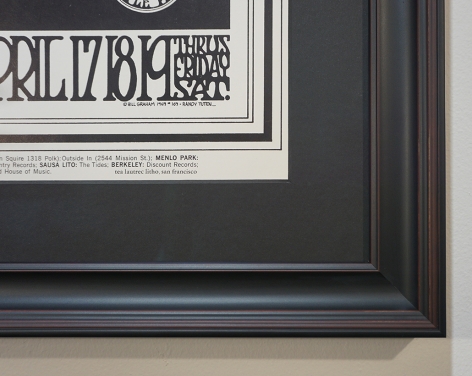 This stunning poster announced the first-ever live performances by The Band which followed the release of “Music From Big Pink.” The performance would be remembered for many reasons, not the least of which was the two-hour delay caused by lead guitarist Robbie Robertson's mysterious illness. Promoter Bill Graham stalled the crowd and pulled in a hypnotist to work on Robertson. It worked. Perhaps the name of The Band’s second album explained it; “Stage Fright.”

The Ace of Cups, were a rarity at the time: an all-female band. They were named after the tarot card by their astrologer/manager – the Tarot card shows a cup with five streams of water flowing from it. He told the women that the streams represented the five of them, and that they should "go with the flow" to see where the music would take them.  In late June 1967, following Monterey Pop, several of the bands stuck around and played a number of free and paid concerts in San Francisco. The Cups were given their break by Jimi Hendrix who invited them to open for him at a free concert in the Panhandle near Haight Ashbury.

In London that December, Hendrix told Melody Maker about some of the "groovy sounds" he had heard that year, "like this girl group, Ace of Cups, who write their own songs and the lead guitarist is hell, really great.” Several record companies wanted to sign the group but they felt the offers were too low and some members were concerned about the pressures of touring and so they were never recorded. Interestingly, the group has come back together and is finally recording that first album in 2018.