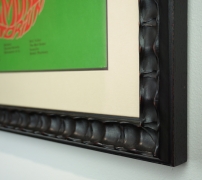 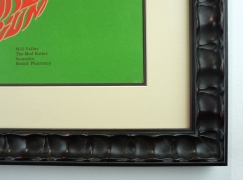 Wes Wilson’s  style of filling all available space with lettering, of creating fluid forms made from letters, and using flowing letters to create shapes became the standard that most psychedelic artists followed. It helped put the “psychedelic” in the art. The first clear example of this, and a key piece in Wilson’s history, was the poster BG-18, done for a show with the Association at the Fillmore Auditorium (who were riding with the hit song, “Along Comes Mary,” referred to in the poster).

Set in a background of green is a swirling flame-form of red letters. The incredible lettering of the BG18 is widely considered to be the pinnacle of Wes Wilson’s achievement in the genre he invented. While Wilson designed 17 of the first 18 Bill Graham posters, Wilson himself considers this to be the first true ‘psychedelic poster.’