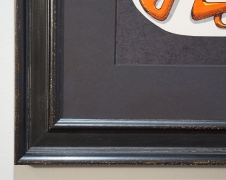 Known as “Sore Thumb,” this image is one of a handful of iconic images of the era. Used to promote a March 17-19 series of shows featuring the Grateful Dead and Jefferson Airplane, this rare poster was designed by Alton Kelley. The image is a not so positive reference to the Do-It-Yourself nature of the Carousel Ballroom where the concert was played. The Carousel was a short-lived venue and posters from it are quite scarce and in high demand.

The Carousel, located at the corner of Market and Van Ness, was originally a swing-band era dance palace. The Grateful Dead & Jefferson Airplane decided in early 1968 that they had had their fill of Bill Graham's promotion at the Fillmore and decided to manage their own shows (as well as other groups) at the Carousel. But the bands were better musicians than business managers and there were problems from the beginning. Too many people were let in for free and so the Dead and Airplane began playing there for free just to keep it going – the Dead nearly 20 times in the first six months of 1968 and the Airplane 8 times.

Meanwhile Bill Graham was getting worried about the original Fillmore which was in a heavily black neighborhood becoming restless and violent following the assassination of Martin Luther King Jr. in April 1968. In a classic example of Bill Graham’s determination and business acumen, he flew over to Europe to track down the owner of the Carousel and over many rounds of drinks finally convinced the owner to lease it to him instead. Word is the bands were greatly relieved and Graham immediately shut down the original Fillmore and renamed the Carousel the Fillmore West.