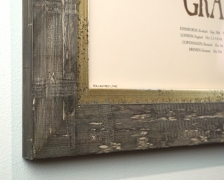 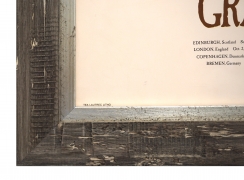 This poster was printed for the Grateful Dead’s 3-week European tour comprising 14 shows in six countries and began September 30, 1981. This is a stunning image and combines several motifs from standard Grateful Dead iconography in a new way. 1981 was a generally strong year for the band. Brent Mydland had fully settled in by then, and newer songs like, “Feel Like a Stranger,” “Alabama Getaway,” “Althea” and the combo of “Lost Sailor” and “Saint of Circumstance”—had matured nicely.

On a day off in Germany, October 11, Garcia and Weir had gone over to Amsterdam to meet some friends of manager Rock Scully’s, including Basketball Diaries author Jim Carroll, William Burroughs, and a Dutch poet laureate named Vinkenoog who had the world’s largest library of psychedelia. That night, Weir and Jerry had followed Jim Carroll’s rock/poetry set at the Melkweg with a 35-minute acoustic duet. The next day, back in Germany, the band heard that their two gigs in the south of France had been rained out, and they faced the choice of either staying in Germany doing nothing or blowing all their money in Paris before their next gig. Garcia, Weir and Rock Scully convinced the rest of the band and the crew to go to Amsterdam instead. The crew accepted - grudgingly - on the condition that they not have to take the equipment.

So on what Scully describes as the band’s last real adventure, the Dead played two gigs on mostly borrowed equipment in a small, sweltering 700-capacity club tucked away on the south side of Amsterdam. The band seemed free of the pressures of a regular tour date and could mess with the setlist. On the first night, Brent pulled out the only “Far From Me” of the year, and they played the first ever “Spoonful”. The second night ( Bob Weir’s 34th birthday) saw them open with a rare acoustic set, and the electric set boasted the first Gloria since 1968, followed by the first “Lovelight” since 1972, and the band’s only performance of “Hully Gully.”

The Barcelona show ending the tour was the only time the Dead ever played in Spain, Jerry’s father’s homeland. This was the last time the Dead played Europe until 1990.