Jessica Simpson has these Beatle prints running up her stairs. (we prefer the way we frame ours) 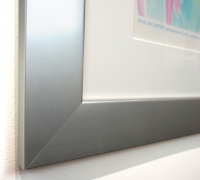 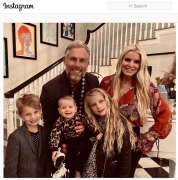 In 1967, Beatles Manager Brian Epstein commissioned fashion and portrait photographer Richard Avedon to shoot the band members and design a set of posters that would visually capture the new psychedelic direction of the Beatle’s music. Avedon took a number of shots of the group on August 11, 1967, four of which were later adorned with psychedelic effects. Avedon overlaid the solarized prints with Day-Glo colors and symbolic attributes; Ringo's white peace dove, George's mystical henna patterns, Paul's flower power, and John's trippy eyeglasses.  They were first published in the January 9, 1968 edition of the Look Magazine in the U.S. and were subsequently sold as posters such as you see here. They were also offered for sale in Stern Magazine in Germany, The Daily Express in England, and Varagids in Holland.

In Look magazine you could order your set of “Flame Bright John, Flower Power Paul, Mystic George and Dove Loving Ringo”, to come in the mail for $1.50. All 4 printings were simultaneous in 1967 and there were 4 different printers, one from each country that printed the posters for their respective publication. The more common Stern and Daily Express posters were similar in size measuring 19" x 27" while the Look Magazine versions are the largest of any of the series at 22" x 31". These are the largest pieces, from the Look Magazine series.

These posters have been reprinted but only the original 1967 printing is considered the authentic and will likely be the only one to continue going up in value. There is no question that tens of thousands of these posters were produced but the question is how many have survived? People (kids) put them up on the walls with tacks or scotch tape and many just got thrown away or are wrecked. These posters are very large and were printed on thin paper so they damage particularly easily. For this reason, we decided to back these with linen, which stabilizes and preserves them. This base acts as a support for framing the posters without having to touch any part of the poster in the process.