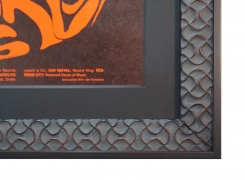 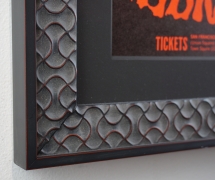 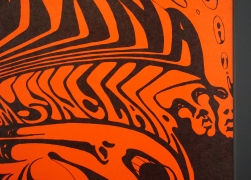 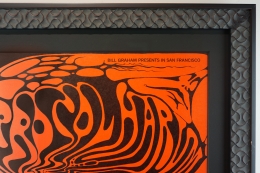 This wild and swirling masterpiece by Lee Conklin features a melting smorgasbord of different lettering styles and hiding, disguised type. And of course Lee Conklin cannot resist also slipping in at least a half dozen faces and who knows what else.

Procol Harum were  an English rock band formed in 1967. Their best-known recording is the 1967 hit single "A Whiter Shade of Pale", one of the few singles to have sold over 10 million copies. Although noted for their baroque and classical influence, Procol Harum's music also embraces the blues, R&B, and soul.

The band was named after manager Gus Dudgeon's Burmese cat. The cat's "cat fancy" name was Procul Harun, Procul being the breeder's prefix. The band was led by lead singer Gary Brooker and the band’s most productive period from 1967-1971 featured Robin Trower on guitar. This tour of the U.S. was backing up their second album, Shine on Brightly.

In the absence of a definitive origin, the band's name has attracted various interpretations, being said to be (incorrect) Latin for "beyond these things," or "of these far-off things." The name of the band is frequently misspelled; often with "Procul", "Harem", both, or other variations. But they made some great music that holds up today.

1968 was a year of hard work and refinement for Santana. They had yet to release an album but they had an angel in their corner in the form of Bill Graham who also happened to be their manager. Graham liked the Latin-tinged rock that the band played as it reminded him of the Latin Jazz he used to dance away the night to years earlier in NYC. Carlos’ work ethic and background having come from nothing also appeared to Graham and so while they got plenty of gigs and were Bay Area favorites although it took their performance at Woodstock to propel them to the band we know today.