Detail of Pooh and Piglet 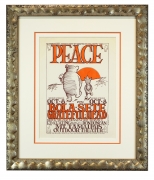 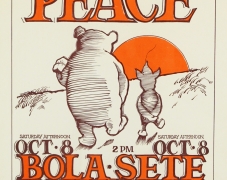 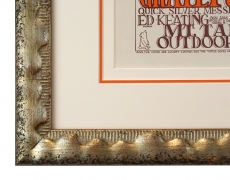 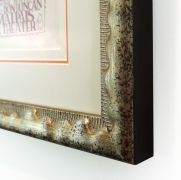 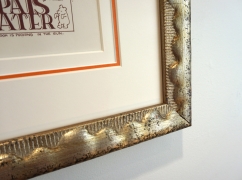 This Mouse Studios design is one of the classics of the era. Three different versions of this image exist; the one offered here is the version rarely seen - more common versions have Joan Baez as the headliner instead of Bola Sete. The central image portrays Pooh and his pal, Piglet. [the poster notes, “And the cows are almost cooing, and the turtle-doves are mooing, which is why a Pooh is poohing in the sun.”]  Indeed, Pooh carries a kilo in his arm and Piglet is smoking a joint according to Kelley, as they walk off into the sunset.

This afternoon concert held in the beautiful outdoor amphitheater nestled high up on Mount Tamalpais overlooking the Bay Area was to promote write-in congressional anti-war candidate, Phil Drath. He did not win the election, but later was part of a group who sailed to North Vietnam to deliver supplies to “the enemy.”

Bola Sete was a Brazilian jazz guitarist of some reknown who was born in 1923 and eventually settled in the San Francisco Bay Area. In the early 1960s he had a permanent gig at the Sheraton Palace and later played with Vince Guaraldi, the pianist of Charlie Brown fame. Sete had just knocked out the crowd a month earlier at the well-respected Monterey Jazz Festival and so he headlined this event, after Joan Baez pulled out.