Close-up of frame at agnle 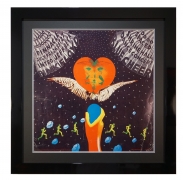 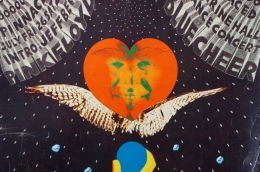 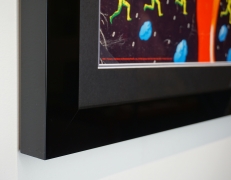 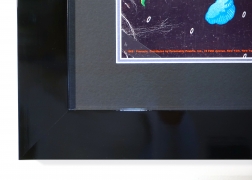 This poster is a brilliant collaboration between two of the best poster artists of the 1960s, John Van Hamersveld (1941- ) and Bob Fried (1937-1975). The poster advertised a pair of shows featuring the Jeff Beck Group which at this time included Rod Stewart and future Stones guitarist Ron Wood. These posters were printed in a very small quantity and are highly-prized, especially among Pink Floyd aficionados.

The face you see in the heart is that of one of the artists, John Van Hammersveld. Van Hamersveld was a partner in Pinnacle Productions which produced many Los Angeles concerts in the 1960s at the Shrine Auditorium and adjacent Expo Hall, near USC. He had come to fame earlier as the designer of the 1964 iconic “Endless Summer” film poster and he also designed the cover of Magical Mystery Tour for the Beatles.

Pink Floyd’s 1968 North American Tour was designed to support their second album, A Saucerful of Secrets, released at the end of June in the UK, but not until July 27 in the U.S. - one of the dates of these two shows in Los Angeles. The tour comprised 23 shows in 10 cities. Syd Barrett had officially been replaced by David Gilmour by April 1968 and increasingly the 1968 and 1969 shows consisted of post-Barrett compositions, with notable exceptions being "Astronomy Domine" and "Interstellar Overdrive", both of which were performed into the 1970s.

In 1968, a large gong also became a characteristic part of the band's live show following its introduction at the "Games for May" concert in 1967. Their audiences changed during this time as well: while Barrett-era crowds consisted mainly of hippies who would dance in time with the music, they now drew a more "intellectual" (or stoned) crowd, who would sit and remain quiet until the last note of a song was played.