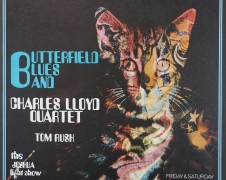 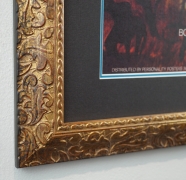 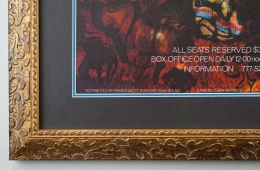 This is one of the rare full-sized posters that promoter Bill Graham commissioned for the Fillmore East. Because the venue started selling out as soon as it opened, he didn’t need to advertise much as people “just came.” Instead, he switched to small, inexpensive and very readable postcards and handbills.

This very attractive poster projects a psychedelic light show onto a sitting and alert cat. The Fillmore East was known for its light shows, produced by Joshua White and his team. White studied electrical engineering, theatrical lighting, and magic lantern techniques at Carnegie Tech and also film-making at USC. The light shows used multiple image-making devices including film projectors, slide projectors, overhead projectors, color wheels, watercolors, oil colors, and glass crystals. These all would be arranged on two levels for their performances. The Joshua Light Show based their shows on four elements; projection of pure color, concrete imagery, variety of color effects and shaping of the light.

“Paul Butterfield was the first white harmonica player to develop a style original and powerful enough to place him in the pantheon of true blues greats. It's impossible to overestimate the importance of the doors Butterfield opened: before he came to prominence, white American musicians treated the blues with cautious respect, afraid of coming off as inauthentic. Not only did Butterfield clear the way for white musicians to build upon blues tradition (instead of merely replicating it), but his storming sound was a major catalyst in bringing electric Chicago blues to white audiences who'd previously considered acoustic Delta blues the only really genuine article.” - Steve Huey