First printing,lithograph, Near Mint minus 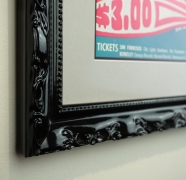 Here is a 1966 Wes Wilson poster for the incomparable Otis Redding at the Fillmore. The legendary Stax singer made his only Fillmore appearance for three nights in December of 1966. There was a different opening act each night. The following December, the beloved R&B star would meet his tragic demise at age 27. The concert was  The gig was commercially and critically successful, paying Redding around $800 to $1000 a night. It prompted promoter Bill Graham to remark afterward, "That was the best gig I ever put on in my entire life."

In 1967, Redding performed at the influential Monterey Pop Festival as the closing act on Saturday night, the second day of the festival. Until that point, Redding was still performing mainly for black audiences. At the time, he had not been considered a commercially viable player in the mainstream white American market.” But after delivering one of the most electric performances of the night, and having been the act to most involve the audience, “his performance at Monterey Pop was therefore a natural progression from local to national acclaim,...the decisive turning-point in Otis Redding’s career.” – Ian Inglis