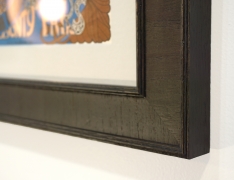 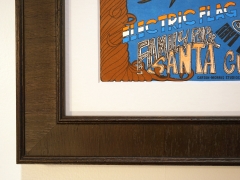 This might be one of the best-looking posters featuring the Doors; the central design is a photo of Jim Morrison surrounded by reclining women with flowing hair. This was one of two Folk-Rock Festivals held at the Santa Clara County Fairgrounds, the second one taking place in 1969. This particular festival had a great lineup of bands, including the Doors, Jefferson Airplane, The Animals, Big Brother & The Holding Company and others. San Francisco Music Columnist Ralph J. Gleason wrote that, “although there hasn’t been anything such as folk-rock since Bob Dylan ceased making personal appearances, this is the name of the event.”

It was held in a hot and dusty field with no seats and 28,000 tickets were sold. In a precursor to the tragedy at Altamont, the Hells Angels were there to guard the stage, described by reviewer Philip Elwood later as, “a free-loading, swaggering stage guard, treated as honored guests (and announced as “our guardians”), who were uncalled for and an obvious concession to intimidation.”

The Saturday lineup was instructive in terms of the hierarchy of San Francisco bands. When the afternoon rolled around, the lineup in order was the Youngbloods, Steve Miller Band, Grateful Dead, Big Brother & the Holding Company and the Jefferson Airplane. Sunday, the festival closed with the Electric Flag, Country Joe & the Fish and the headliners, The Doors.

At the time of this sold-out Festival, The Doors were approaching the height of their powers and they had just finished their not-yet-released third album, “Waiting for The Sun.” They were playing a number of outdoor shows and inciting the police and the crowd had become part of their act. Jim Morrison cut his own hair on the way to this performance and there is footage from the event in the Doors movie “Feast of Friends.”