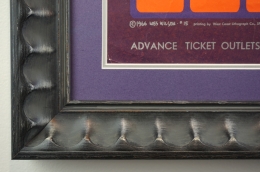 This poster featuring the very first of Bill Graham’s famous New Year’s Shows features warped psychedelic lettering filling all the space in the frame of a woman’s hair. Or, is it a judge with a silver-powdered wig? As with many of the psychedelic posters from the late 1960s, you get to decide. The bill featured three of San Francisco’s top local bands, who would typically play multiple sets alternating with each other.

On the top and bottom of the poster, Wilson employs his famous typography with blocky letters distinguished only by tiny cuts and squiggles inside to qualify them as distinct letters. Based on a typeface created by Vienna Secessionist artist Albert Roller, Wilson’s variety of his most famous type style has been immortalized as a font style (“Wes Wilson Regular”). A less extreme version of this type is used in the central image, which, being more legible, probably made Bill Graham happy

The first New Year Bash started another Bill Graham tradition, that of going all night and then serving breakfast for everyone. And with the Jefferson Airplane, grateful Dead and Quicksilver Messenger Service in rotation all night, it doesn’t get much better than this in San Francisco.