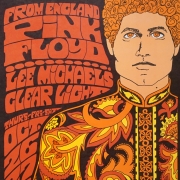 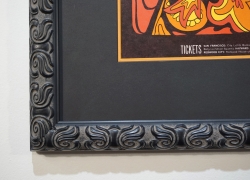 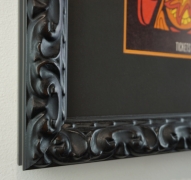 The Nehru Jacket is a hip-length tailored jacket with a high, closed Mandarin collar that was popular in the late 1940’s and afterward among the Indian rich and powerful (Indian meaning “from India). They became popular in the late 1960’s as the hippies explored many other cultures, religions and fashions. In this poster a curly haired man  is wearing a very psychedelic Nehru Jacket which has a sash advertising the Fillmore and the venue.  This highly sought out poster by Bonnie MacLean, the only female artist in the late 1960’s genre, who was then married to promoter Bill Graham.

Pink Floyd, “From England,” was on their first tour of the United States. Unfortunately their manager screwed up the band’s visa’s and they were not able to fly to the U.S. until November 1 – after these dates. They finally got to play at Winterland November 4, opening for Big Brother and the Holding Company. Pink Floyd had just released “Piper at the Gates of Dawn” two months earlier and were at the height of their Syd Barrett period. Barrett was well into the bizarre behavior that led to his replacement by David Gilmour by the end of this year.