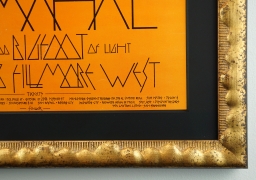 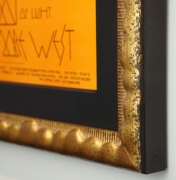 Called "Mushroom Man," this was one of David Singer's most psychedelic posters. The diminutive runner, stripped of his vanities, padded towards the cosmos via the not-so-subtle mushroom portal. Singer himself noted the collage had a "... certain LSD mystique." The first edition of this 1970 poster is quite rare and difficult to find.

In February 1970, the Grateful Dead were starting to reap the benefits of their great new album Live/Dead, released in November 1969, which was receiving plenty of airplay now that FM rock stations were all over the country.

This was a particularly momentous month for the band, notwithstanding a string of fantastic live performances. In late January-early February they recorded Workingman's Dead, and while they toured madly throughout the month they realized that manager Lenny Hart was stealing from them. In late January 1970 Hart had proposed merging Grateful Dead operations with Chet Helms's struggling concert production company, The Family Dog. But when Lenny Hart refused to show Helms the Grateful Dead books, people got suspicious. Sometime in February, Ramrod told the band "it's [Lenny Hart] or me," and Garcia said "well, you know we can't do without [you]."

Lenny Hart had stolen $155,000, bankrupting the band for all intents and purposes. This ironically condemned the Dead to endless touring, with the result of their 300+ shows from 1970-1972 produced legions of Deadheads.

Taj Mahal had an excellent live act who had never broken through beyond a certain level. His band featured the great, underrated guitarist Jesse Ed Davis (among many other accomplishments, Davis played lead guitar on the original recording of Jackson Browne's "Doctor My Eyes").  Big Foot was a power trio from Sacramento.