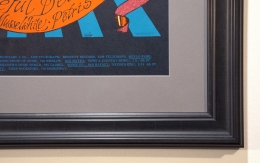 This is one of the classic Grateful Dead images of the psychedelic era. These posters promoted the 1968 Memorial Day shows at The Carousel Ballroom. The days associated with this concert did not match the dates and many of these posters have the days at the top blacked out with a sharpie. The type without the blacked-out dates is far scarcer and commands a premium and this is that rarer piece.

The “Memorial,” referenced was simply a generic reference to the fact that these shows were held over Memorial Day weekend. The fact that the skulls could be seen to reflect the horrors of the war in Vietnam going on at that time adds to the iconic nature of this 1968 poster. This disturbing, yet colorful design illustrates a darker reflection of the national day of remembrance.

The Carousel Ballroom was a short-lived venture by several of the San Francisco bands in managing their own music venue. The experiment, which only spanned about 5 months in 1968, failed due to the bands’ obvious lack of business prowess. That, paired with the questionable ethics of Grateful Dead manager Ron Rakow, led to the Carousel Ballroom’s demise. Additionally, Bill Graham did not take well to the competition and did everything he could to ensure the venture failed. Although the Carousel was short lived, it inspired a series of posters that are amongst the best of the entire genre of 1960's psychedelic concert posters.