Close-up of signature  [note: we have several Loveladys, all signed. Signature may vary slightly] 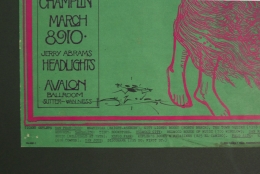 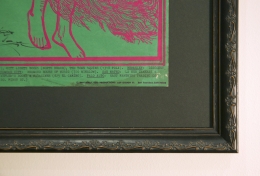 NOTE: This specific piece shown here was sold. We have another Lovelady (two-timers, yes) that is in superior condition and we can send you photos - we include this to show you the piece and how we frame it]

An interesting juxtaposition of swirling art nouveau hair on one side matched with blank space on the other. It calls to mind the art of Alphonse Mucha and other poster artists from the height of the Art Nouveau period. The Stanley Mouse signature in pen dates back to the mid 1980’s.

Love was a Los Angeles-based band which had some minor hits with Seven and Seven Is, Alone Again Or, and You Set The Scene. Their influence (Robert Plant of Led Zeppelin, Jim Morrison, The Jesus and Mary Chain, The Dammed…) was much greater than their commercial success. The Congress of Wonders was a Bay Area political comedy act and Sons of Champlin were a hitless horns-based mainstay of the SF music scene.