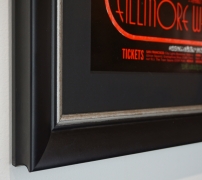 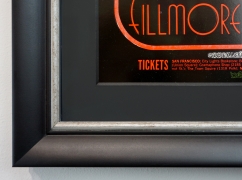 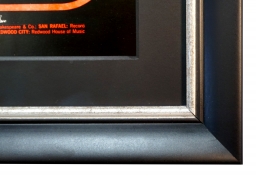 Randy Tuten designed this poster for the Fillmore West which marked the first American Tour for Led Zeppelin and their first show in San Francisco. Tuten writes, “This was the first show for Led Zeppelin in SF Bay Area. I used a classic car just for the fun of it, but also because Led Zeppelin was kind of the new Cadillac of rock & roll, to use a metaphor.” Maybe so, but they were still opening for Country Joe and the Fish.  Last time that happened though!

This was an historic set of shows for more than just the first appearance of Led Zeppelin, whose eponymous debut album was released the day after these shows in the U.S.  In addition, Country Joe and The Fish performed as a farewell to the group's most famous lineup, with Jack Casady of Jefferson Airplane standing in as the bass player. The band was joined by Jerry Garcia, Jorma Kaukonen, Steve Miller, and Mickey Hart for the 38-minute finale, "Donavan's Reef Jam". Recordings from the concerts were later assembled on the live album “Live! Fillmore West 1969.”

“Hail and farewell this weekend at Fillmore West. Goodbye to Country Joe and his Fish, who swim their own ways after Sunday night and greetings to Led Zeppelin, as impressive a new British rock group as we’ve ever heard. The Zeppelin has had some KSAN radio play in recent days but otherwise came in cold; no LPs, only two months organized and a pile of ad agency flack. But this Zeppelin is no lead balloon. They already sound like a veteran group and soon ought to be ranked in the company of the Who, Rolling Stones and the late Cream."    -  San Francisco Examiner