Close-up of frame and artist signature

Close-up of numbering and 3D quality of the ink on paper.

Closeup of ArtRock imprint and numbering 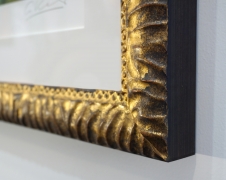 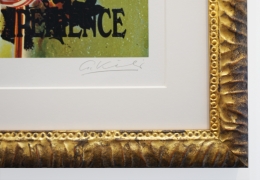 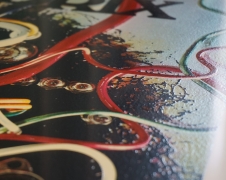 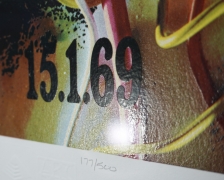 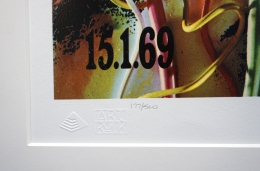 Gunther Kieser created this masterpiece for a January 19, 1969 performance in Stuttgart, Germany. The original poster carries the correct concert date of January 19, 1969 at the lower left, while the merchandise posters carry an incorrect date of January 15 (Hendrix was in Berlin that day). Due to the tremendous popularity of this image, it has been printed at least four times and bootlegged several more. This is the third printing from Artrock (all three of the authorized reprints by Artrock were in runs of 500 – the first two were lithographs – this run was the only one done in brilliant, raging silkscreen where you can literally see individual layers of paint).

This image of Hendrix is one of the most enduring in rock concert poster history. The poster features image of Hendrix set against psychedelic-colored background with additional collage elements of various wires and metal plugs set amongst his hair, creating a truly unique image of the famed rock star. The tour covered 9 cities over 12 days in Germany in January 1969, starting in Hamburg and ending in Berlin. There were so many American GIs in Germany who went to the concerts that Hendrix played Reveille at one of the shows.

German artist Gunther Kieser was one of the top designers of rock concert posters in the 1960s. Besides Hendrix, Kieser also designed memorable posters for the Grateful Dead, The Doors, Miles Davis, Traffic, Fleetwood Mac and The Who. He also did several album covers for the BlueNote jazz record label. This silkscreen print is printed on thick paper, backed by archival linen, and signed and numbered out of 500 by the artist.