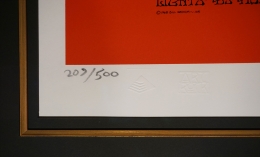 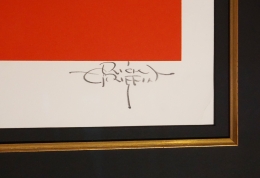 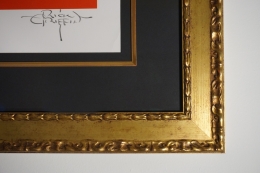 Jimi Hendrix and the legendary “Flying Eyeball” images are indelibly linked in the psychedelic poster art of the late Rick Griffin. Griffin discovered The Eyeball, in a much more benign form, in the 1950s auto detailing art of California pinstriper Von Dutch and reworked it over time to become the winged, bloodshot figure parting a ring of fire with serpent-like tentacles. The highlighted lettering, vivid color, and complicated imagery reflect Griffin's attention to precise details  - he was known for redrawing the lettering on his art many times to get it perfect. This is probably the most sought after of all the Filllmore Posters and rivaled only by FD-26, Skeleton & Roses, for desirability.

The original poster was made to promote a series of February 1968 concerts at the Fillmore and Winterland by the Jimi Hendrix Experience, John Mayall & The Bluesbreakers, and Albert King. Bill Graham would often use both venues for a major act, using the smaller Fillmore for Thursday and Sunday night and Winterland for the weekend shows. The shows were significant in that they featured bluesman Albert King whom Hendrix worshipped.

“Albert King was a vastly influential guitarist for many reasons: He played with a raw ferocity that appealed equally to fellow bluesman and younger rockers. He was one of the first black electric bluesmen to cross over to white audiences, and one of the first to adapt his playing to Sixties funk and soul backings, on classics like ‘Born Under a Bad Sign.’ But perhaps King’s ultimate legacy is that he embodied two of guitardom’s most sacred tenets: what you don’t play counts as much as what you do, and speed can be learned, but feeling must come from within. The left-handed guitarist [like Hendrix] played ‘Lucy,’ his upside-down flying V, with absolute conviction and economy. He could slice through a listener’s soul with a single screaming note, and play a gut-wrenching, awe-inspiring 10-minute solo without venturing above the 12th fret.” - Guitar World

This magnificent piece is a hand-printed silkscreen that was authorized by Rick Griffin and produced by Artrock in 1989, shortly before Griffin died. This printing is more than twice as large as the original poster and the colors, printed on a rich thick paper stock leap out of the frame. This was a limited edition - this one is number 209 out of 500 and has a nice signature by Rick Griffin.