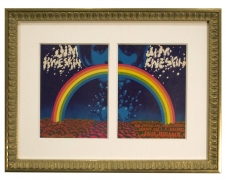 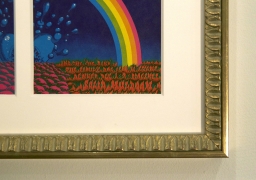 Another collaboration between two of the Big Five, let’s see if you can identify which elements of the design were by Griffin and which by Moscoso in this cool pair of matched handbills.

It did not take long for rock promoters to realize that the psychedelic posters they were putting up around town were ending up on people’s walls. It was great advertising for the venues and the whole scene and promoters frequently printed extra originals given to people attending the show to take home. Often the poster would be reduced in size to a handbill and some of those were envisioned as postcards where one could “write home,” about the show.

At the time, The Family Dog was running it's 4-month experiment at "the Denver Dog," a venue also known as simply 1601 W. Evans Street in Denver.  These twin handbills (Bahr Gallery also stocks the two twin poster versions - please inquire)  advertised shows on Dec 1-2, 1967 in Denver and  back home at the Avalon on Dec 8-10. Jim Kweskin and his Jug Band (which included Geoff and Maria Muldour) were the featured performers on both bills, backed by the Sons of Champlin in San Francisco and a local band in Denver called Solid Muldoon.