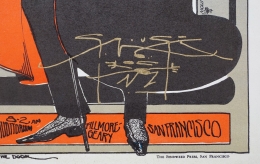 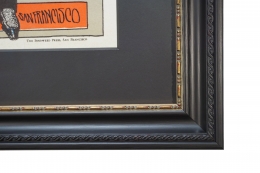 NOTE: We have sold this piece but it does occasionaly resurface in the marketplace - please let us know if you would like to be contacted when we get another one  - e-mail here

One of the classic images of the time, this Mouse-and-Kelley-designed poster is known as the “Edwardian Ball.” This event was held for the Associated Students of San Francisco State College as their Homecoming dance. This poster is quite scarce; only 250 were printed according to the student activities manager who commissioned Mouse to design it. This poster also features a gorgeous signature in gold ink by the artist, Stanley Mouse. Interestingly, this was one of the few “dance concerts,” at the Fillmore from 1966-1968 that was not produced by Bill Graham

The Jefferson Airplane had released their first album, “Jefferson Airplane Takes Off,” in September of this year and in October they parted ways with Signe Anderson their original female lead singer. Her replacement, Grace Slick, was already well known to the band—she had attended the Airplane's debut gig at the Matrix in 1965 and her previous group, the Great Society, often opened for the Airplane in concert.

Slick's recruitment proved pivotal to the Airplane's commercial breakthrough—her voice complemented Marty Balin's and was well-suited to the group's amplified psychedelic music, and, a former model, her good looks and stage presence greatly enhanced the group's live impact. "White Rabbit" was written by Grace Slick and “Somebody to Love” by her brother in law, Darby Slick, while they was still with The Great Society and so she brought both songs with her from the Great Society. Both songs became breakout successes for Jefferson Airplane and have ever since been associated with that band.