Close-up of extra signature by Moscoso 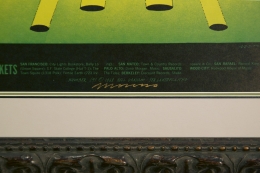 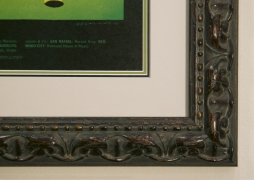 This poster is the twin brother of BG-140, Jimi Hendrix Scarab. It features a large iron mask with horns and little pincers holding up and worshipping the moon, which reflects out rays of yellow and orange versus the blue rays coming out from behind the scarab in BG-140. Both posters feature the little yin-yangs dancing below but the colors on them are reversed. Is this object really a trash burner? Who knows?  Feel free to purchase this piece and rename it in your own home!

Iron Butterfly was flying on the wings of In-A-Gadda-Da-Vida, their hit single which was a full side of an album at 17:05. The single was edited to 2:32 but the album of the same name as the song, wound up selling more than 30 million copies. Iron Butterfly is credited along with Blue Cheer, Jimi Hendrix, Steppenwolf, Vanilla Fudge, and others with making the transition from psychedelic rock to heavy metal.  The album was recorded locally, at Ultrasonic Studios in Hempstead, Long Island. Extra points if you know where the origin of the name comes from In-A-Gadda-Da-Vida, no googling allowed.