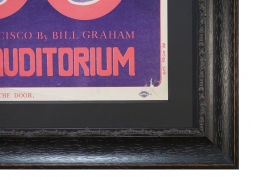 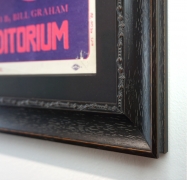 This poster for Fourth of July weekend in 1966 advertises a three night run of shows that featured most of the notable San Francisco bands of the day, plus Love from Los Angeles. Early posters like this one from 1966 have become increasingly rare in top condition and you can see that this copy has some wear in the form of tack holes and probably at least a decade of absorbed pot smoke from someone’s dorm or den.

Janis Joplin joined Big Brother in June 1966 so this July 1 show was one of the first with this potent combination of Big Brothers’ psychedelic San Francisco guitar wailing and Joplin’s unique, uncompromising voice. The second night’s show featured the Great Society, named after a set of Lyndon Johnson’s domestic programs in 1964-65 with the goal of eliminating poverty and racial injustice. The Great Society featured Grace Slick on vocals - this was before she joined the Jefferson Airplane - and they actually wrote what became the Airplane’s biggest hits, “White Rabbit,” and “Somebody to Love.”

The July 3rd show featured Love, a band from Los Angeles that had just released their first album in March and had gotten the attention of the Rolling Stones, Yardbirds and others - they became one of the 1960s favorite cult band. The Grateful Dead performance on this date is widely played on the Sirius FM Grateful Dead channel.