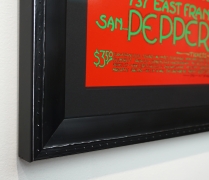 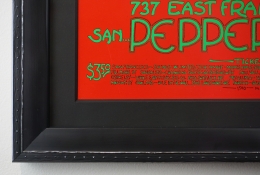 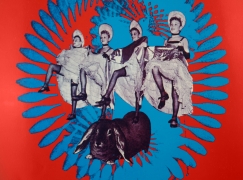 Artist Mark Behrens designed this unusual poster featuring young girls in can-can clothing with a large rabbit in the foreground, splashed in red and blue with green psychedelic lettering. It is a particularly important piece for fans of Hot Tuna because it not only was the opening night of the refurbished Pepperland, but Jorma Kaukonen and Jack Casady performed two acoustic-based shows as Hot Tuna without Jefferson Airplane and received good reviews, signifying that Hot Tuna could survive without the other band to support it. [Hot Tuna concerts up until this gig were always as openers for Jefferson Airplane]

Pepperland was a music hall that is somewhat of a legend in Marin County lore. It began as Litchfield’s and in June of 1970, it was renamed Euphoria, and had a brief, but storied, history that included gigs by Big Brother as well as two nights featuring the Grateful Dead and the New Riders of the Purple Sage. Pepperland, while it was only open for less than three years, played host to a pretty amazing and diverse roster of international talent, including Pink Floyd and Chuck Berry.

Hot Tuna began as a side project to Jefferson Airplane, intended to mark time while Grace Slick recovered from throat surgery that had left her unable to perform. The band's name came from someone who called out, "hot tuna" after hearing the line 'What's that smell like fish, oh baby,' from the song "Keep On Truckin'." Once the Airplane had resumed touring, Hot Tuna found itself opening for the Airplane. Their early repertoire derived mainly from Kaukonen's Airplane material and covers of American country and blues artists such as Reverend Gary Davis, Jelly Roll Morton, and Blind Blake.

Born Don Van Vliet, Captain Beefheart was one of modern music's true innovators who employed idiosyncratic rhythms, absurdist lyrics, free jazz, Delta blues, latter-day classical music and rock & roll to create a singular body of work notable for its avant-garde creativity. While he never had mainstream success, Beefheart's fingerprints were to be seen all over punk, New Wave and post-rock. Their opus, Trout Mask Replica had been out for about a year when this concert took place.