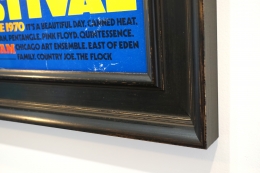 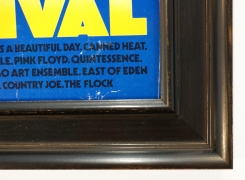 This poster was designed by London’s Alan Aldridge, who was responsible for many album covers during the 1960s and 1970s, and helped create the graphic style of that era.  He made a big impression with his illustrations for The Beatles Illustrated Lyrics book. Other pieces included Elton John’s Captain Fantastic, David Bowie’s Diamond Dogs, an alternative Bob Dylan Don’t Look Back poster, and various graphics pieces for the Beatles and the Who. His work was characterized by a flowing, cartoony style and soft airbrushing – very much in step with the psychedelic styles of the times. His work includes the 1971 anti-war poster featuring the USA, entitled “A great place for hamburgers but who'd want to live there!”

The Holland Pop festival  - also known as the Kralingen Music Festival was held in the Kralingse Bos in Rotterdam on June 26-28, 1970. Performing bands included The Byrds, T. Rex, Santana, Jefferson Airplane, and the headlining Pink Floyd. Approximately 150,000 attended. Coca-Cola was a prominent sponsor. In both English and Dutch, the festival is also known by the English name Stamping Ground, and is often referred to as the Dutch Woodstock. It took place approximately one year after Woodstock, and two months before the third Isle of Wight Festival and was noted for the mellow crowd.

The Festival became an influential event, as it turned out to be the actual beginning of the Dutch tolerance policy towards marijuana. The many present undercover cops did not arrest any of the users or small traders: it became clear that there were just too many, and all of them peaceful. In 1971, a documentary about the festival appeared, titled Stamping Ground and several books and exhibitions have been dedicated to the event.