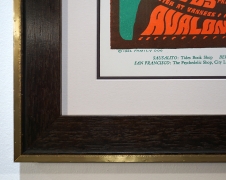 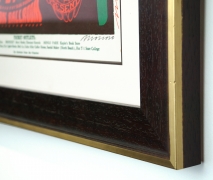 Victor Moscoso designed this poster, known as “Hippie Santa Claus.” The central image is a Santa Claus-like character with small horns, surrounded by a circle filled with small triangles. At the time of this concert, the Family Dog was using radio ads promising a Hippie Santa Claus, who intoned “Ho Ho Ho,” in a very hip voice, thus the name of the poster.

Moscoso referred to this image as “The Satanic Santa,” because of the horns but in Central  European tradition there is an evil character (Krampus) who brings bad things to children who are misbehaving. [Note: if Krampus visits it is customary to offer him a glass of schnapps.] But, upon further review, this Santa looks rather supremely happy, stoned perhaps, and so maybe we could agree on the name, Mischievous Santa.

None of the three bands on the bill had yet to release their first album (Dead, March 1967, Moby Grape, June 1967, Steve Miller, June 1968) and this was truly a time when the peace and love and San Francisco-style music was local and underground.

After making an exploratory visit in late summer of 1965, Miller vowed to come back. A year later he moved to Berkeley and lived out of his VW Microbus. He visited the Fillmore on October 16, 1966 and joined in on stage for a jam with members of The Butterfield Blues Band and the Jefferson Airplane, invited on stage by his friend Paul Butterfield. When Miller announced he was moving to the Bay Area, the crowd cheered.