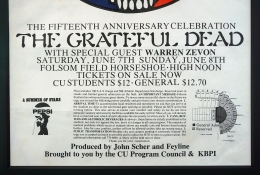 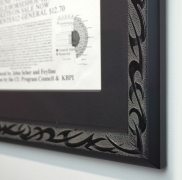 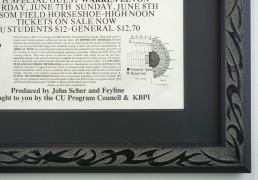 This is a very rare early-'80's Dead poster from a fondly remembered pair of shows in Boulder that were billed by promoters John Scher and Barry Fey as the Grateful Dead’s 15th anniversary shows. The designer is unknown and there was some restoration as the poster was pulled down rather hastily from public display at the time of the shows.

The region had become huge Dead stronghold by 1980, but they hadn't played in Boulder since 1972. They'd played in Denver 9 months earlier (and would come back there a year later). That's likely why, rather than one show, they played up against one end of the stadium for two shows. A helicopter flew over and dropped bags of weed over the crowd. The shows started at noon - ostensibly to take advantage of an afternoon sound ordinance. In perfect Dead synchronicity it was Parent's Day on campus.

Warren Zevon opened both night (as well as the previous show in Arizona). Zevon did the exact same show both nights, including the same jokes and as would be have been expected, a large portion of the audience was there for all three nights and by the June 8th show, were barking out the punchlines to hiss jokes. Zevon was perhaps at the height of his powers, as he had recently released his fourth album, Bad Luck Streak in Dancing School, which followed his 1978 disc, Excitable Boy which contained most of his best known hits.

There is a great-sounding audience recording (taped by none other than Rob Eaton of Dark Star Orchestra!) of the 6/8 show HERE: